Never have I seen such bleak landscapes, such forlorn vistas. It is a grim place for grim folk, and for the dead, for everywhere there can be found spirits. 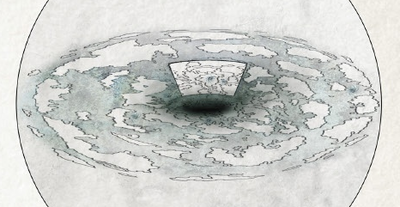 The Realmsphere of Shyish with the Primer Innerlands marked right above the Shyish Nadir at it's center.

The Realm of Shyish, also known as the Amethyst Realm or the Realm of Death, is one of the eight Mortal Realms and is aligned with the wind of Shyish. Nagash ruled the realm until it was overrun by the forces of Chaos during the Age of Chaos.[6a]

The Rune that is used to represent the Realm of Shyish is the Scythe always pointing down, represnting the heavy burden that those who serve the Underworlds carry. Both wizards and warriors often wield such a weapon in defence of the realm. [27] 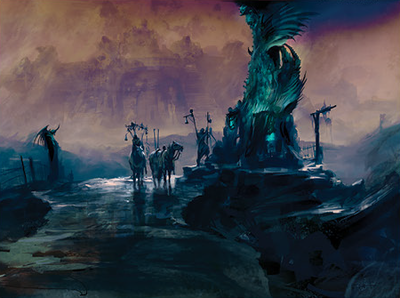 A reality of endings and the grave, the Realm of Shyish is a place of the dead. The embodiment of death and inevitability. [27]

Shyish was once the resting place for the souls of the departed in the Mortal Realms, who having traveled across the void to the realm of the dead would become a spectral inhabitant of one of the myriad of underworlds. Each was different, shaped by the beliefs of a specific civilisation, race and culture. The realm was a place of paradises and hells, each a final destination for the dead before they moved on. When Nagash took control of the realm, he was able to use these legions of spirits for building vast monuments and places of power, as terrifying armies or for other purposes.[17]

In turn Chaos rested control from the Great Necromancer and many of the underworlds became mere playthings of the champions of the dark god and places of torment for the souls of the dead, a true living hell. It was only in the Age of Sigmar that Nagash arose once again to blight the realm and contest the other gods for control of shyish. [17]

The Wraith Moons of Shyish are silver and dead, scoured of all threat by the will and power of the Undying King, Nagash.[10]

The soil of the realm has been leeched of nutrients and only the most hardy, but often somewhat tasteless strains of fruits and vegetables gorw successfully here. [34a] One of the main food sources in Shyish is fish, like the Bledrigs fished in Lake Lethis.[30][31]

The peoples of Shyish are grim, somber and insular. Life is tainted with a since of dread, for the threat of Nagash hangs over their heads, like a cruel executioner's axe. In so, quite ironically, this mentality has breed fearsome warriors and mages. For the realms peoples will attempt live as long as possible and will fight any enemy tooth-and-nail. For many fear they will become the tormented slaves of Nagash when they die. [27]

Fashion in the realm is represented with the colors often associated with Shyish, Black and Purple. But there are many other colors, from the gray of grave-dust and deep red of blood, to the brighter colors, white, pink and light blues of the paradise underworlds. [27] 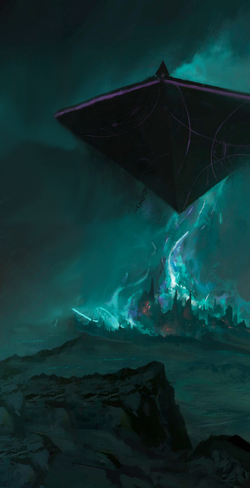 The Black Pyramide of Nagash

During the Age of Chaos, both sides initially fought to a stalemate, as Nagash's alliance with Sigmar bolstered his forces. Archaon and Tzeentch conspired to drive the allies apart, leading to a breaking of this alliance and the conquest of the All-Points by Chaos.

Sigmar invades the realm in revenge for what he sees as the betrayal at the All Points, he destroys many powerful servants of Nagash before he retreats to Azyr.[25]

After Nagash was left vulnerable by the War of Heaven and the Underworlds, the realm was invaded by the forces of Chaos an event that would be known as the Wars of the Dead. Nagash was slain in the Battle of the Black Skies but the Mortarchs managed to rescue his corpse and retreat to the underworld of Stygxx. The stronghold of Nagashizzar was razed by skaven during the War of Bones. Nagash later returned slaughtering the Chaos forces at the Starless Gates and reawakening monuments of necromantic power from Helspoint to Morrsend.[1a]

Many powerful souls, near dead and dead are claimed by Sigmar, robbing lands such as Hallost and Ossia of their best warriors and leaders.[25]

The lord of death conceived of a plan to consolidate his power and ensure eternal dominance over the realm and beyond. Undead minions were set the task of gathering realmstone and amassing it at Nagashizzar, creating gigantic monuments to concentrate the power of shyish in these structures – in particular the Great Black Pyramid. [18]

Nagash takes control over many underworlds and consumes the minor gods of death that ruled them.[18]

The Undead forces attacking the Arch of Bones were turned aside by the Bloodthirster Khar'zak'ghul only to be rescued by the arrival of the Stormcast Eternals.[1a]

During the Realmgate Wars, the Anvils of the Heldenhammer Stormcast Eternals came to the aid of Neferata to defend her city Nulahmia against a Slaaneshi champion, Lord Lascilion with Sigmar offering Nagash the chance to re-forge their alliance.[6d]

Kharadron Overlords, renowned traders, still venture to Shyish, though it is rare they descend past the highest mountain peaks, where the duardin clans of Shyish mainly live. They rarely built their strongholds beneath the earth itself - too many things came creeping through the dark of the underworld for their liking, although a few still lived in the old manner - the duardin of the deserts and wastelands of the south, for instance. [10]

In the Time of Tribulations, Nagash enacts his Great Ritual, triggering the Necroquake and altering the whole Realm so that it became a metaphysical whirlpool drawing souls down to Nagashizzar and the Black Pyramid.[24a] 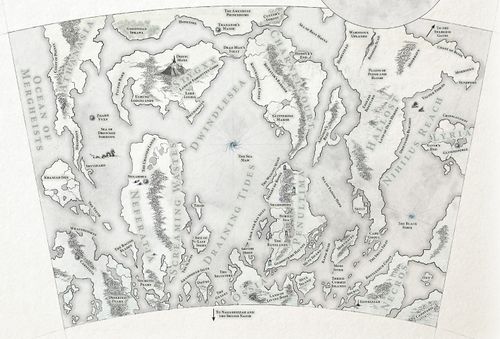 The Shyishan underworlds to the east of the Prime Innerlands are together known as the Ossiarch Empire.[33]

A vast desert made mostly from powdered blood. Before the coming of Nagash it was populated by the 'Duchys of Geist' that raised the raiding giants bats there. Nagash fought with the Duchys of Geist and ultimately conquered them. Powdered blood and some giant carcasses - is all that left from the defenders. Also it is a location of the 'Temple of Final Rest'.[4]

Once one of the grandest of the soulblight empires, now ruled over by the The Carrion King[5b]

Nagash's stronghold, little more than a blasted crater after his overthrow [1a] but it was rebuilt in its full glory in the Age of Sigmar.[24a]

Contains the 'Corpsefane', a ghoul church to Nagash covered with ten thousand flayed faces.[5c] The River of Souls also runs through it, moving from the Arch of Secrets to the DeathLords' Gate, this area was ruled by Queen Aylessa, a vampire servant of Queen Neferata, but both her great barge-keep and city of Crookback were destroyed by the Ironjawz Megaboss Dakkbad Grotkicker [8a] 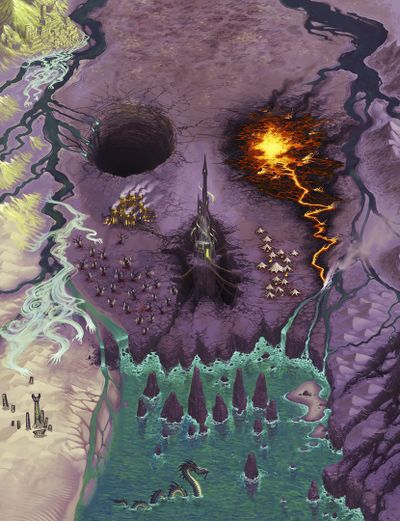 A ruined kingdom containing the Gate of Corpses Realmgate to the Realm of Azyr. Ruled over by the Abhorrant Ghoul King Marrowthirst.[5e]

A procession of Nighthaunt

The Realmsphere Magic and spells associated with the realm of Shyish are known as Amethyst Spells.[34b][34c]