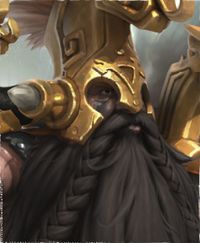 He has a crooked smile that which is missing several teeth, the replacements glinting gold. [1b]

He has led his warriors into battle in all of the Mortal Realms and claims to have slain every type of beast that flies, slithers or walks. [1a]

Towards the end of the Realmgate Wars he once again led his lodge into battle as part of the attack on the Mercurial Gate [1a] bringing three of his sons with him. [1c] They all survived the battle. [1d]

He rides Vulkdar into battle. [1a]