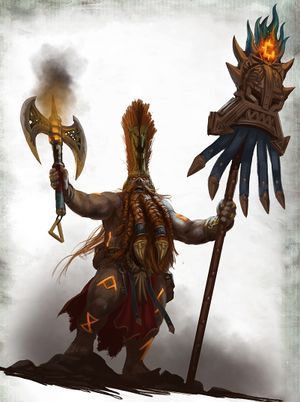 Their place is in the thick of battle for the lodge's warriors will rally around a Battlesmith as he holds aloft his Icon of Grimnir and emboldens them with fiery recitations of the lodge's history. It is also where they may be witness to the heroics of their kin ready to commit new deeds and legends to their memory.[1][2b]

In their Magmahold's Hall of Fyre, they tell the sagas of the lodge at Ghuzfests and other festivals which for many lodges can take weeks on end. Sometimes they will be called upon to recite these histories during forced marches across the realms whilst on campaign so that the warriors might be full of battle fervour when they finally meet their foe.[2b]

They carry a brace of Fyresteel Throwing Axes and an Ancestral Battle-axe.[1]

The Icon all Battlesmiths carry is a sacred image of their god that any Fyreslayers would die to protect. It is also their own creation, forged by themselves into a unique image of Grimnir. Because of this the Runefather will only appoint the greatest and most skilled of the forge workers to become Battlesmith for forging an Icon is a great responsibility and it must be worthy to be an image of their god.[2a]

Some Battlesmiths are drawn to a specific Aspect of Grimnir, such as Grimnir the Doomseeker, and will forge their icon in the image of that particular aspect.[3a]