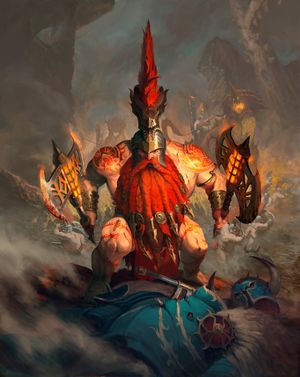 A Vulkite Berzerker standing over his defeated enemies.

Vulkite Berzerkers are the professional warriors that form the main foot troops of the Fyreslayer Lodges. Their forge-tanned, muscular bodies are honed from a lifetime of combat, and wrought with Ur-Gold runes, empowering them with the strength and resilience with of Grimnir. They are storied and renowned warriors and many are the tales told of them fighting on, bleeding from dozens of wounds, arrows protruding from their flesh, but Grimnir's fury still raging within them. They stubbornly cling to martial pride and are born from a foundation of ancient tradition and dedication to the art of war.[1][2][3][4][5][6a]

Karls are the champions and leaders, wielding ornate weapons and helms into battle. They are stronger than other Vulkite Berzerkers. They also lead their lodges in ritual preparation before a battle, ranging from tattooing, to beard braiding, to coating their crests with various substances to keep them tall and rigid.[1][2][3][6a]

Some of these Berzerkers carry into battle the Horns of Grimnir. The sonorous call is said to be the booming voice of their god, and when blown the Ur-Gold runes hammered into the flesh of the Fyreslayers glow brighter and their zeal and fury reaches ever greater heights.[2][6a]

They can wield Fyresteel Handaxes, Fyresteel War-picks and a Bladed Slingshields. Some carry Fyresteel Throwing Axes on their belts. Those wielding pairs of Handaxes fly into battle like a whirlwind of death and destruction whilst those wielding war-picks employ them to punch through the armour and flesh of their foes. Those that carry Bladed Slingshields are trained to hurl them at their targets as they charge, ripping them free from their foes wounded corpse once they have closed in. Like their god they wield little armour into battle and spike their hair into a tall crest, which they dye in the colours of their lodge. Some carry silver or golden keys, a symbol of rank and of their ancestral ties to Aqshy.[3][5][6a]