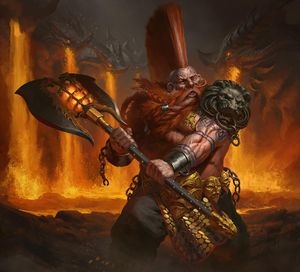 Image of Gotrek from the cover of Realmslayer

Gotrek Gurnisson is a Duardin Slayer who stepped into the Realm of Chaos from the World-that-Was in the End Times and eventually found himself in the Mortal Realms. [1]

He strode through a realmgate into the Unbak Fyreslayer lodge, at first thinking he was still within the Realm of Chaos. Disdainful of the strange dwarves and their stunted wingless dragon (a magmadroth) he resorted to violence – it would take many duardin to finally overcome him and throw him into a cell with Maleneth Witchblade. When Skaven attacked the hold, the young Battlesmith Broddur released him, although Gotrek was still not convinced any of it was real. The Skaven stole the Master Rune that Maleneth was seeking and fled.[1b]

Subsequently he sought to travel to Hammerhal Aqsha, seeking the Stormcast Eternals who he is convinced might number Felix Jaeger amongst their ranks. He is accompanied by Broddur and some of the slayers from the lodge who consider him Grimnir reborn – much to his disgust. As they travel across the Flamescar Plateau they save the young prince of Edassa and discover a plot by the forces of Chaos to infiltrate Hammerhal with a large force.[1c]

Reluctantly he enlists the aid of a necromancer Uthan who promises to take them to the city via the Realm of Shyish.[1c] After a battle at the Burning Gate where most of his companions are slain, he finds his way to the Nighthaunt kingdom of the Amethyst Fords and another combative encounter with both the Skaven and Maleneth.[1d] Finally he reaches Hammerhal with Broddur and encounters a Stormcast Eternal, but no sign of Felix. He decides to get drunk and watch the city burn but is finally roused into action by the Battlesmith and the Aelf assassin who reveals herself to be a member of the Order of Azyr. Gotrek and the others disrupt a Chaos ritual seeking to harness the stolen Master Rune and he hammers it into his own flesh to prevent it. [1e]

Following this act and to his immense annoyance, many more Fyreslayers also saw him as their warrior god reborn, a god that Gotrek considered had betrayed him.[2a][1b] Those that sought him out he made swear oaths to leave him alone and he now sought his lost axe, still accompanied by Maleneth who herself had pledged to protect the Master Rune.[2a] Pursued by various assassins across the Bone Desert in the Realm of Ghur they travel to the Eight Pillars to try and find the inscriptions that are rumoured to speak of the legendary Axe of Grimnir, his lost weapon. [2]

However, when the aelf is poisoned, he takes her to the Temple of the Lightning in an attempt to save her – when she recovers and after yet another attempt on her life, he confesses that he needs her as a companion and as someone to explain the world to him. [2b]

Following the Necroquake, Gotrek seeks to confront Nagash, accompanied reluctantly by Maleneth and the damaged Stormcast Eternal Trachos. They briefly stay in the town of Klemp[3a] before it is engulfed by a Bonestorm and then a horde of Crypt Ghouls. They travel to the previously hidden Morbium, a Amethyst Princedom seeking a way to travel to Nagash, but they are caught up in the invasion of the kingdom by the Flesh-Eater Court of King Galan.[3b] As they fight to protect themselves and the inhabitants, Gotrek discovers that the inhabitants of the princedom have echoes of his own long lost people. They defeat the Ghoul-king and his court, leading the survivors away towards the Stormkeep of Hammerskáld. [3]

Gotrek is portrayed by the actor Brian Blessed in the Realmslayer Audio drama. [1]