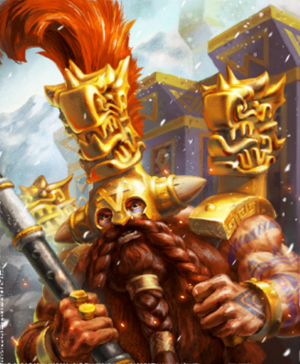 Bael-Grimnir is a legend among fyreslayers, the Runefather of the mighty Vostarg lodge who sits on the ruby-red Fyrethrone. In his long years as Runefather, he has gathered more Ur-Gold than any of his ancestors baring the fabled Thorgar-Grimnir, a feat that has won great respect from the other lodges.[1a][2a]

He has ruled the Vostarg for centuries, and has fathered over 50 sons with his Hearthwife Grunhilda but none have yet impressed him enough to be appointed his heir. Despite his age, Bael is a unmatched warrior amongst his logde - except perhaps for the legenday Grimwrath Arngard the Fearless - and he still spends much of his time at the head of the Vostarg's armies, riding into battle atop his magmadroth, Flamespitter. He is a fierce and deadly warrior, and his countless trophies from hundreds of races and all eight of the Realms are hung in the Hall of Helms.[1a]

He is a grim, gruff and obstinate duardin - and impossible to please as many of his sons would say - but there is a wry humour and a caring heart beneath the surface. He is doughty and honourable, like all his lodge, and could be seen as callous and cold with his many sons, yet he seeks only to drive them on to success, so that a worthy heir might emerge from amongst them.[3b]

As Runefather he wields the lodge's Latch-Key Grand Axe, Hrathling, a storied weapon that has seen innumerable battles in the hands of Bael and his ancestors.[3a]