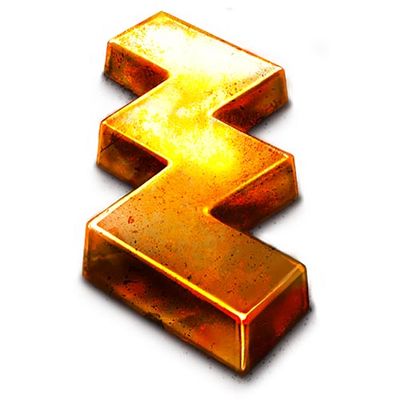 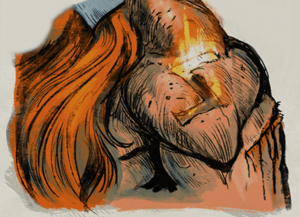 Ur-Gold was created from the death of Grimnir and Vulcatrix, which scattered their divine fragments across the realms where they buried themselves deep underground and fused with veins of gold. It transmuted about five in every hundred parts of the gold and bound it with the power of god and godbeast.[5a]

It is at the Forge-Temples that the Zharrgrim forge the Ur-Gold a lodge has accrued into powerful runes so that it might be used up to give a Fyreslayer strength in battle and release Grimnir's spirit.[5c]

Only the Fyreslayers have been shown to be capable to detect this metal but even amongst them most can barely sense it, only the Auric Runemasters have the deep connection with their god - and therefore the splinters of him bound inside Ur-Gold - to track it across the Mortal Realms.[1][5a]

While all Fyreslayers can sense Ur-Gold to some degree only the Runemaster who know the sacred lore of metallurgy, fire and the spirit of battle can distinguish it from regular gold. It is they who lead the extraction, smelting the alloy to separate it into its purest form. This metal is then cast into sacred runes, most which signify an aspect of battle, like fury, endurance, loyalty to kin, strength, indomitable boldness. One even represents Grimnir himself.[5c]

Then the Runemasters pound these sigils, while they are still glowing hot from the forge, into the flesh of Fyreslayers in the ritual known as the Grundtogg. Only through this agonising process can the rune truly fuse into the Duardin's frame. The Fyreslayers that go through this process immediately feel more connected to their god, but only in battle can they unleash their power, augmenting the physical might and martial prowess of Fyreslayers and boosting their already great strength and skill to a supernatural level. However, it is the Runesmiters who are able to fully awaken the power of the runes, chanting rituals that ignite their warriors runes and unlock the full power and battle-rage of Grimnir.[5c][8a]

Ur-Gold is a finite resource and its power is spent when a Fyreslayer fights. To maintain the power Ur-Gold grants new runes must be hammered into a Fyreslayers flesh to replace the spent ones. As the divine strength of Grimnir leaves him, a Fyreslayer will crave for more, this affliction is called the Glimmerlust.[5c]

The Glimmerlust is one of the reasons why the legends other races tell of Fyreslayers speak so often of their greed. It is the responsibility of the Zharrgrim priesthood and in particular the Runemasters to make sure their fellow lodgemembers stay on the path of Grimnir, by making sure no warrior is given more than they are owed or that they can withstand. In this sense the Runemasters serve as councillors, advisors and leaders second only to the Runefathers, and even they heed the Runemaster's advice in matters of gold and Grimnir.[5c]

A Fyreslayer will become completely consumed by Glimmerlust without the help of the Zharrgrim Priesthood, of which there are many grim tales of such lone warriors. Those Doomseekers that have suffered to such fate, like the Axe of Magorth or the Immolated Slayer, become the reviled Doomvarag. These rabid lone wolves kill other Fyreslayers so they can take the runes from their remains.[5c]

Some of the Runes made with Ur-Gold are:

Ur-Gold can also be tainted with plague. A pox from Nurgle that clings only to gold will drive any who possess the tainted gold to kill all others to hold it.[5b]

It has also been known to be corrupted by Khorne who took his due of Ur-Gold following the duel of Grimnir and Vulcatrix, and had it blended with brass from his citadel.[6]