The Mortal Realms are home to many nations devoted to the Changer of the Ways. Those places of torment are a kaleidoscopic clash of madness made real where hope turns to screaming terror and impossible beasts are brought to life. Anyone who dares to trespass in such a land is sure to mutate into something foul, to have one’s mind unravel and one’s soul curdle.[2]

The ambitions of the Disciples of Tzeentch go further than the conquest of the realms. The twisted path they walk see them longing for reality to change, for that which was once solid and reliable to turn into a quicksand of sanity-sapping hideousness.[2]

Ultimately, they would see Tzeentch’s own crystalline domain consume the Mortal Realms. In their own perverted minds, to try outwit the Architect of Fate is futility made manifest, therefore one is better to serve the inevitable victor of the Great Game.[2]

Furthermore, the Disciples of Tzeentch have achieved much in the shadows of civilisation all across the Mortal Realms. They thrive on duplicity and illusion, on misdirection and artifice. To fight against them is to fight against raw magic, insidious cunning and the worst kind of change. And as any Disciple of Tzeentch will whisper to you in the darkness, change is inevitable.[2]

Though all the realms, with the notable exception of Azyr, was mutated by the Disciples of Tzeentch's presence, it is in Chamon that the Changer of the Ways concentrated his forces. The Realm of Metal being infused by transmutative magic, Tzeentch's servants take special interest in the sub-realms most saturated in magic, notably the Spiral Crux following its corruption by the Lode-Griffon.[1b] 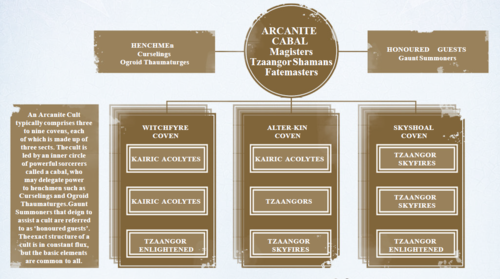 The hierarchy of an Arcanite Cult.

The Disciples of Tzeentch is a faction that encompasses all that worship Tzeentch. This includes units from multiple factions: