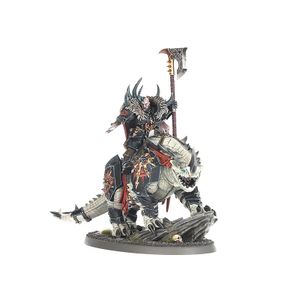 A miniature of a Karkadrak being ridden by a Chaos Lord.

Karkadraks are monstrous lizard-beasts that were once native to the Allpoints, although with the coming of the Age of Chaos they have since spread to every realm (with the exception of Azyr). Their scales are as hard as rock, with durability often bolstered in turn by dark iron. They are most often used by Chaos Lords that prefer a more natural alternative to the twisted Daemonic Mounts offered to other champions - this is just as well, because only the strongest of linebreakers can force the fearsome brutes to submit. [1]