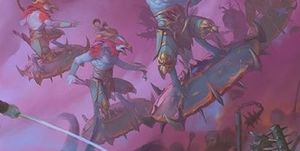 A group of Tzaangors riding on Discs of Tzeentch.

Disc of Tzeentch are flying Daemons of Tzeentch often gifted to powerful servants of the God of Change.[7]

Discs of Tzeentchs are primarily used as mounts by powerful spellscasters of Tzeentch not only to help them fly, but also defend them with their sharp teeth and horns.[2][3][4] A few of it's known riders are: