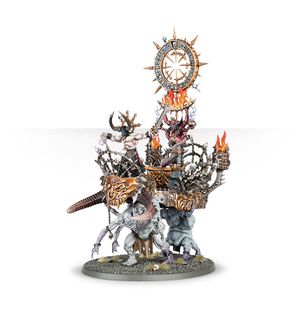 A miniature of a Chaos Warshrine.

Chaos Warshrines are physical testaments to the power of the Dark Gods built and used by the Slaves to Darkness. They are colossal effigies carried by twisted abominations across the surface of the realms, covered in braziers flickering with dark flame and twisted daemonic faces wrought from bronze, or stranger yet materials. Above the blood-slicked altar itself is a grand sigil of the eight-pointed star - and it is through this portal that the energies of the Realm of Chaos are channelled by the Warshrine’s keeper. Whether it is ordained with the symbol of one of the Ruinous Powers – more common in Godtouched warbands – or left as an icon of unaligned Chaos in all its majesty, warriors of the Slaves to Darkness rally to a Warshrine as a symbol of their god’s supremacy. [1]

As the Shrinemaster leads the dark rituals, the Warshrine becomes a lodestone of dark energy. Glowing with an unnatural light, the sigils offer a degree of protection to the devoted in its presence. When the Shrinemaster utters the darkest of invocations, however, the true power of the gods becomes manifest, granting even the undevoted of that particular patron a portion of their power. The truly dedicated are granted power even magnitudes above that, their loyalty duly rewarded. [1]