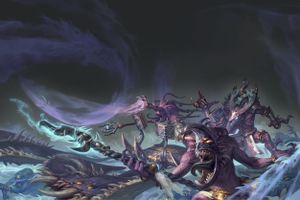 Three types of Heralds of Tzeentch. Changecaster in the front and behind it is a Fateskimmer on tge left and Fluxmaster on the right.

Heralds of Tzeentch are more powerful lesser daemons created by Tzeentch blessed with independent minds to lead his foot soldiers . Heralds do not divide into multiple beings when struck down but are far stronger and resilient in addition to being capable sorcerers that can blast enemies with wyrdfire of pink or blue. Many also carry arcane tomes or scrolls from which they recite incantations to augment their sorcerous might while there mere presence increases the abilities of their fellow daemons.[1]

Changecasters are the most common Heralds of Tzeentch and get their named from the mutating magics they wield. Most of their roles are rather menial such as guarding sources of magical power or overseeing repairs within the Crystal Labyrinth. In battle they lead packs of Horrors, a hard task as the Horrors are known for capering or off or getting into mischief.[1]

Changecasters release devastating barrages of magical pyrotechnics and are also capable fighters with the ability to transform even master swordsmen into mutating slime with a tap of their twisted staves.[1][2]

They are armed with either a Staff of Change or Ritual Dagger and carry a Arcane Tome that hold scriptures of ancient incantation that allows a brief mastery of chosen spell lores.[1][2]

Fateskimmers are Heralds that acquire a Burning Chariot – such conveyances are usually rode by Exalted Flamers, but Tzeentchian daemons are not above stealing from one another. Fateskimmers swoop and dive across the battlefield, borne upon a Disc of Tzeentch that is pulled through the skies by a pair of captive Screamers.

These Heralds cackle madly as they unleash sorceries selected from the most eldritch tomes in their collection. Some, wishing to show that they are no slouches, will smash their contraptions directly into enemy lines; the more cautious and controlling instead lurk upon the battle's edge, yelling orders amidst the madness and change-fire. [1]

The title of Fluxmaster is borne by Heralds who ride a Disc of Tzeentch. As they fly across the battlefields, reality reshapes itself – they are harbingers of both change and raw anarchy, devolving matter into boiling ectoplasm. Fluxmasters are often used as messengers and outriders within the armies of Tzeentch. Some lead packs of Screamers in aerial charges on the enemy's flanks or even take them to battle in the skies, whilst others take leadership of groups of their fellow Horrors, using their advantageous position to better augment and direct their charges or confound their foes. Wherever they go, the Fluxmasters leave shimmering trails of disruption that scar reality for years to come. [1]