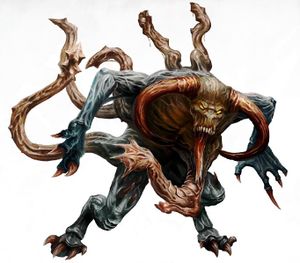 Chaos Spawn are abominations that roam without purpose, their insane wailing echoing throughout the landscape and are often used by Slaves to Darkness armies and Beasts of Chaos as rampaging monsters. They were once mortals that were infused with the entropic energies of Chaos causing their bodies to endlessly mutate into gruesome new forms. Their bones grow into long, spear-like spikes that protrude through flesh and skin while their internal organs burst to spray acidic juices before being enveloped into the creature’s body once more. Both their minds and wills are as deformed as their minds, completely dissolved into blankness by the corrupting influence of Chaos, leaving behind only the desire to kill. They have a monstrous strength often lashing out at their foes with their limbs turned into writhing tentacles, pseudopods and other freakish mutations.[1][3b]

Chaos Spawn can bear the Mark of the Dark God that created them.[2a][2b]

Gigantic Chaos Spawn are larger, more twisted variants of reality and flesh and are often consider literally nightmares made flesh. With their larger size, their gift from the Dark Gods becomes more unstable, able to be blessed with strength and stamina on one moment, that can turn to anguish and excruciating pain on the next. They have an unstoppable urge for carnage and slaughter, attacking their foes with slavering maws and freakish mutations. [2b]

Tzeentchian Chaos Spawn, those that accompany Arcanite Cults suffer even more horrific mutations than the rest of their kind, mutated to the whim of the Great Mutator. They instinctively shuffle, crawl and bound towards their prey to lash at them with various arrays of claws tentacles and other hooked appendages.[2a]

The Gavespawn see Chaos Spawn as the most blessed creations of Morghur, a form of his degenerate will brought into being. When the mightiest champions of the Gavespawn are grievously wounded in battle, they are sometimes granted the Gift of Morghur and mutate into Chaos Spawn.[3a]