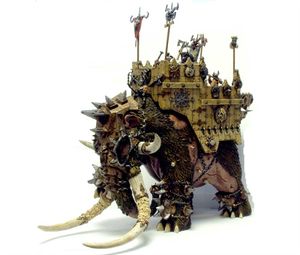 A miniature of a Chaos War Mammoth.

Chaos War Mammoths are immense beasts that can be found if Monsters of Chaos and Slaves to Darkness armies. They are used for their size, crushing smaller creatures between their trampling feet and using their huge goring tusks, carrying the force of a battering ram, to impale and grievously wound the largest monsters. Its charge causes the ground to shake and break beneath its weight and the air is filled with its terrifying roar, causing many enemies to lose their discipline. When this enormous creature dies or falls its enormous bulk means that anybody beneath it will meet a grisly demise.[1]

The crew of Chaos Marauders on the beast's back attack by hurling their Marauder Javelins and Axes.[1]

When employed by Slaves to Darkness they will receive gifts from the god the tribe that rides them to dedicates themselves to.[1]

Chaos War Mammoths can have the following Marks of Chaos: