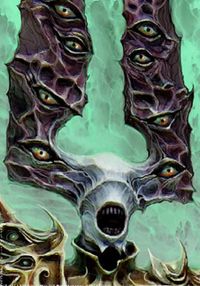 Stilskeen of the Silver Tongue

Stilskeen of the Silver Tongue is a Gaunt Summoner of Tzeentch and a master of disguise that rivals the Changeling. [1]

His rebellions against Archaon's control earned him centuries of punishing torment, leaving his sanity in tatters.[1] [2a]

As the Realmgate Wars drew to a close, the forces of Order assaulted the Mercurial Gate and he used his powers to try and sow doubt in the minds of the invaders. [2a]