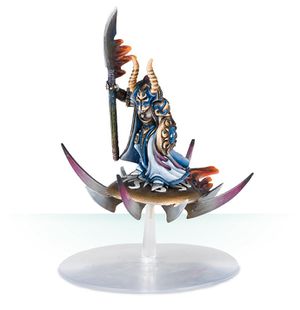 A miniature of a Fatemaster.

Fatemasters are powerful warriors and living conduits of reality twisting energies that work for the Tzeentch Arcanites. They are able to affect the universal laws of causality and ride into battle on Discs of Tzeentch.[1]

To attain the rank of Fatemaster, the aspirant must not only prove their devotion to Tzeentch, but show the cunning and quick thinking favoured by the Changer of the Ways; the Arcanites are not foul-smelling and barbaric Slaves to Darkness armies, after all, but erudite and clandestine warriors fighting a guerrilla war often ensconced deep within enemy-held territory. Indeed, an aspiring Fatemaster must undertake trials that would certainly kill lesser men. [2a]

These trials are the dreaded Nine Trials of Fate, and it takes either an incredible amount of luck or intuition that surpasses anticipation; to duck the sweeping blade that moves faster than human reaction, to espy the treacherous ally before their betrayal – these are necessary not just to succeed in the trials but also to survive them. Those few who complete the tasks are anointed Fatemasters, and sent to lead the secret enclaves of the Arcanite Cults.[2a]

After becoming a Fatemaster these warriors are gifted with mighty boons: a fireglaive, a soulbound shield, Chaos armour and a Disc of Tzeentch. [2a]