From Age of Sigmar - Lexicanum
(Redirected from Exalted Flamer of Tzeentch)
Jump to: navigation, search 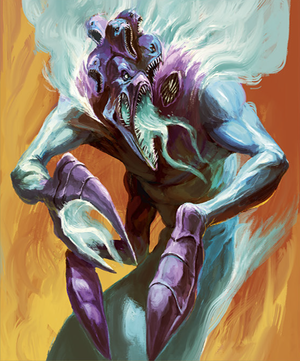 A Flamer of Tzeentch.

Flamers of Tzeentch have tubular bodies which randomly sprout gnashing maws and grimacing faces mimicing those of their last victims. They lack feet and instead have an inverted skirt of fungoid flesh that draws in air before expelling it through powerful contractions allowing it to propel itself in leaps and bounds [2][3][5a]

In Tzeentch’s legions Flamers act as living artillery that unleash gouts of flame from range before bounding forwards to finish off the survivors. Normal flamers are barely sentient but extremely dangerous as they revel in destruction.[5a]

The leaders of the Flamer units are known as Pyrocasters and they are more fire than flesh.[2]

Its long appendages that end in tooth-lined stumps can unleash flames of of raw magic, multicoloured blasts that scorch the senses as well as the body. the flames create disturbing shapes and apparitions and can burst back to life long after they have been stamped out. Smaller flames spill to the ground and imitate the forms of those nearby. The flames laugh and mock their enemies by mimicing their death throes until the flames eventually die out.[5a]

Exalted Flamers are champions of their kind capable of more independent thought and exude sorcery from every pore of their flesh. They are able to spout even stronger warpflames that seem to have a mind of their own by taking the shape of ominous sigils and hideous faces. These flames will turn entire units into piles of black bones and those that survive it will face their flame-wearthed maw. Some of these Exalted Flames ride into battle on Burning Chariots of Tzeentch which leave a trail of warpflame that immolate those over whom they fly while survivors are given the gift of change by the Exalted Flamers that ride upon them.[3][4][1a][1b][5a]