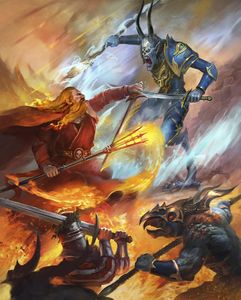 A Magister duelling a Battle Wizard

Magisters are the leaders of the Tzeentch Arcanite cults - they are the spiders at the centre of the metaphorical web, being some of the most powerful of Tzeentch's mortal servants. Each Magister is a powerful warlock in their own right, capable of giving a terrible and disturbing demise to anyone that annoys them. [1a]

The largest of Arcanite cults will have several Magisters within, each possessing their own grandiose title and each constantly attempting to manipulate and undermine the other. To the God of Deceit and Treachery, such action is actively encouraged, as long as it does not interfere with is mercurial schemes. [1a]

Tzeentch, as a god of change, is eager to gift an excess of arcane energy to his followers as well as many a gift and mutation - third eyes, avian features, extra limbs are most common, although stranger gifts still are given. Those who drink too deeply of these gifts, however, usually end as Chaos Spawn. [1a]

Magisters who conquer large enough swathes of land bind Screamers of Tzeentch into service, turning them into Discs of Tzeentch. [1a]

In addition to their numerous mutations, Magisters wield a Warpsteel sword and a Tzeentchian Runestaff. [1a]