From Age of Sigmar - Lexicanum
(Redirected from Arcanite Cults)
Jump to: navigation, search

Tzeentch Arcanites are the mortal followers of the Architect of Fate, the Chaos god Tzeentch. Many mortal worshippers of Tzeentch are sorcerers, among the most ambitious and the hungriest for power of his servants. Scholars and other educated elites who desire unearthly knowledge and power are often drawn to the service of Tzeentch.[1]

In the Mortal Realms, Arcanite Cults are often lead by Magisters, powerful sorcerers blessed with mutations and other gifts of the Great Conspirator. They often take complicated or profound titles such as the Grand Vizier of Change or the Keeper of Illusion. They may rule alone or as part of a cabal of the powerful within the cult, they may be mere puppets of Daemons or about to ascend into the ranks of the Daemon Princes.[1]

Fatemasters are the mighty chaos Lords, warriors that crusade on behalf of their master in many and varied ways and forms as they seek to pass the Nine Dreaded Trials of Fate. They may lead grand armies or conduct a secretive guerrilla war in the heart of enemy territory. Curselings are sorcerers who once aspired to the title of Magister but their magic’s drew forth a daemonic parasite and it now grows within - a cackling, twisted homunculus known as a Tretchlet who guides their path. It also allows them to discern lies from truth and so Curselings are sought after by arcanite cults.[1]

Kairic Acolytes are the rank and file cultists and may be found in all walks of life, living as normal members of a mortal society. To become a cultist one must complete the Kairic Test of Nine culminating in a walk through warpfire which will either destroy them or transform them. They are able to shift between this and their original form, allowing them to remain hidden whilst the cult grows in strength. Some chosen mortals are gifted Vulcharcs chaos-corrupted carrion birds that feast on magi.[1]

The beast-kin that are dedicated to Tzeentch are known as Tzaangors, some are mutants born to humans, others are the result of transformative spells by a Tzaangor Shaman and yet others are birthed by their own many bearing the mark of their god and creator, often being avian in nature. They are found throughout the Mortal Realms usually divided into two distinct groups. The Skyfires ride upon Discs of Tzeentch. Whilst they can see into the future, they are utterly silent – a pleasing contradiction to their god. The Enlightened are more typical beastmen although they too have a dark gift, the ability to see the past. Tzaangor Shamans are spellcasting beatsmen, they often ride Discs of Tzeentch – Screamers to battle, flinging spells of corruption, destruction and mutation.[1]

Gaunt Summoners stand high in the favour of their god, they are vastly powerful magicians although there are only ever nine in existence at one time.[1] Ogroid Thaumaturges are powerful servants of Tzeentch whose mighty bodies are cloaked in skin which writhes with the same arcane energy as their totemic staves.[1] 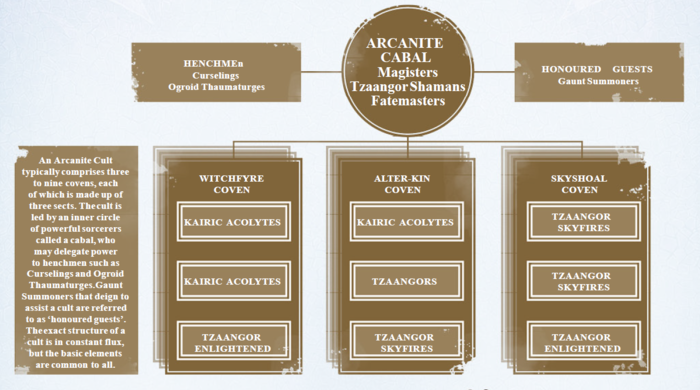 The structure of an Arcanite Cult.