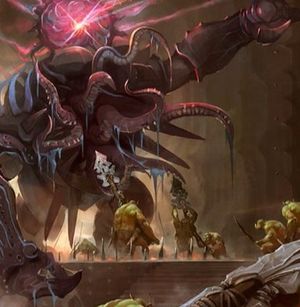 Mutalith Vortex Beast are creatures of chaos, betentacled and clawed horrors whose wild magic turns people around them into disturbing fusions of man and beast and other horrific forms. They are abominations of nature, mutated beyond all reason by the powers of Chaos, into terrifying fusions of monster and magic, each one differing in a striking manner. Any of their servants that wishes to use these creatures in combat, risk suffering mutation or madness.[1][2][4][5b]

On its back there is a strange sphere, a blasphemous imitation of a Realmgate and a pulsating vortex of raw Daemonic energy, that echoes the shape of the 8-pointed star and lead to the Realm of Chaos that shoots bolts of great plasmic energy. It's tentacles, nine huge, ichor-dripping tentacles that extend from its mouth, are able to transmute people it touches. A few have tongueless heads, with grimacing maw and growths growing out of its face. They have a ridge pate. It two tails possessed mouths, tongues and claws on their end. It can attack with its claws or maw.[1][2][4][5b]

These creatures can be marked with the Mark of Tzeentch.[5b]

This creature can be healed by the raw power of Chaos.[5b]

Around them there is aura of mutation that has horrific consequences for those standing in its presences.[5a][5b] Among the known effects are: