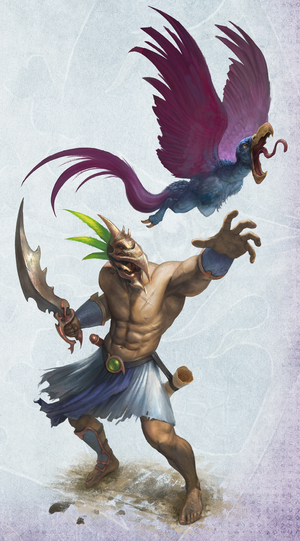 Kairic Acolytes, also known as the Chanters of Change, are the human cultists of Tzeentch that serve their god among the Tzeentch Arcanites . They have made dire sacrifices for the promise of knowledge and power, spending decades becoming worthy enough to attempt the Kairic Test of Nine. They walk amongst the unsuspecting in disguise, remaining covert, waiting patiently until the correct time to strike. When that time comes, they hurl their collective magical might in the form of searing bolts, punishing those who survive with sinister curved blades. [1][2a]

They are led by Kairic Adepts.[1]

Kairic Acolytes are recruited from all walks of life, ranging from tribesmen led astray by an arcane calling to seekers of forbidden knowledge or power hungry public servants all sharing driving ambition. Arcanite Cults target such aspirants with great care, taking years or even decades to ensnare potential supplicants who will one day serve the Architect of Fate. Only those who wholly commit can attempt the Kairic Test of Nine. While the rites vary from cult to cult all end with the walk through warpfire and only those that emerge unharmed become Kairic Acolytes.[2a]

Kairic Acolytes are able to transform themselves to a muscular ideal of the human form, making weapons appear out of nothing by chanting arcane phrases that hurt the ears of the uninitiated and similarly return to their normal forms. This allows Kairic Acolytes to infiltrate and subvert the very forces of those who hunt them.[2a]

While still lacking the ability to cast more complex spells they are able to unleash an arcane fusillade and through combined worship, their arcane power can be swelled to new levels of ferocity.[3]

Kairic Acolytes are armed with Cursed Blades either paired with an Arcanite Shield which can protect against both physical and magical attacks or another Cursed Blade to strong-arm enemy weapons aside to gain a cleaner strike in melee. Others may instead wield a Cursed Glaive.[1][3]

Some may carry a Scroll of the Dark Arts into battle, boosting their allies’ magical abilities.[1]

They are accompanied by Vulcharcs, a flying creature perched on their arm which attack enemy Wizards.[1]