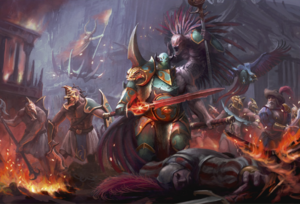 Curselings, also known as the Eyes of Tzeentch, are important leaders of the rituals of the Tzeentch Arcanites that have been blessed with a Tretchlet, a Daemon homunculus.[1]

The Tretchlet's Curse afflicts those who learn one secret too many – or perhaps just the wrong one at the wrong time. Once, the Curselings were rising sorcerers, acolytes and adepts of the dark arts wishing to further their arcane studies. Their curiosity comes with a heavy toll, however - for every secret they uncover coalesces inside their bodies, forming the Tretchlet - eldritch tumours of forbidden knowledge, possessed of a malign intelligence and a daemonic spirit from the Realm of Chaos itself. Like a monstrous parasite, this fiend grows from the body of its host and gives constant hissing advice to gather further knowledge. [2a]

Curselings are highly coveted by Arcanite Cults, often acting as lieutenants for their cabals. They sometimes fulfil the role of inquisitor, due to their mighty physical form, and the Tretchlets' ability to detect lies. Sucking air through their teeth, the grotesque growth tastes secrets and their questions can draw out hidden knowledge – invaluable traits to cults seeking enlightenment. Trial by Curseling is also considered an effective way of determining whether new acolytes are worthy of joining a cult. [2a]

Though the role of lie-seeker is one they excel in, all Curselings hunger for battle, providing formidable warriors on the battlefield, but most valued for the Tretchlet's ability to glean an enemy wizard's spells and hurl them back at the caster.[2a]