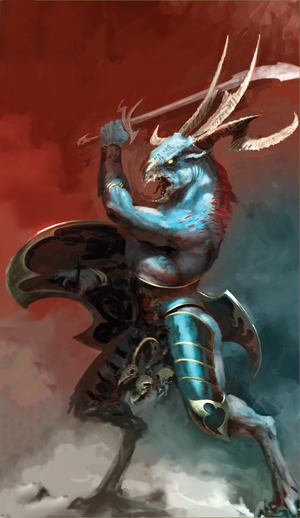 Tzaangor Warriors are Tzaangor savages that dedicate themselves to Tzeentch.[2]

These units are lead by Twistbrays, with more ornated horns, and supported by Icon Bearers, musicians with Brayhorns and Tzaangor Mutants, with two heads and a pair of mutated weapons.[2][1a][1b]

They have been willingly warped and shapes into the forms that please their god and are eager to impress him in the hopes that they are rewarded with more gifts of change.[2]

These are patient creatures, using their bestial cunning with their cold intelligence to deduce the time to strike. When it happens they fight with bitter strength and lunatic energies, hacking their foes using blade or horn.[2]

When the leaders and champions of the Arcanite cults are nearby, Tzaangors are filled with inspiration that leads them to strike killing blows on the enemy.[1a][1b]

In close range they can tear at their foes with their vicious beak.[1a][1b]

Tzaangor Warriors are bedecked with the avian symbolism of Tzeentch and clad in armour of flowing gold and silver. They head to battle armed with Savage Blades, paired with another blade, giving them a better chance of landing a blow on their foe, or an Arcanite Shields, a lavishly wrought shield that can block physical and magical attacks. They can also wield sets of axes and picks, Savage Greatblades and Greataxes.[2][1a][1b][1c]

Tzaangor Mutants wield pairs of mutated swords and axes with an eye modelled on the hilt.[2]

The Icon Bearers wield Ornate Totems that can steal the magical power from nearby wizards and use it to blast their foes.[1a][1b]