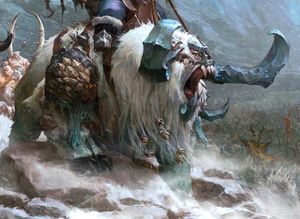 Stonehorns are huge hulking, brutish beasts that are often used as mounts by the Mawtribes and Alfrostuns of the Beastclaw Raiders. Despite the wealth one would attain by slaying a Stonehorn and taking it's bones, their fearsome reputation and volatile nature causes even Ogors to take great caution in hunting and taming the beasts.[1][2c]

The riders on their back are known as huntmasters, using great javelins, hooked bolts and tame hunting hawks. Once they find their target, they rile up the stonehorns into an eartshaking stampede.[1]

The skeletal structure of Stonehorns are made gemstones and rock, a result of their diet of metal, minerals, and stone. Their tusks and horns are similarly made of these precious substances and are highly valued, but few poachers dare attempt to slay the massive beasts.[2c] Their blood is also an icy blue color, and is often imbibed by Ogor Tyrants to gain the strength of the might beasts.[2b]

The stone skeletons of these beasts can quickly become a curse, as only constant moving keeps their stone bones from fusing together. Stonehorns that remain sedentary for overlong become incapable of moving as their bones fuse at the joints and turn them into living statues.[2c]

Stonehorns are valued by any and all Beastclaw Raiders who find themselves on the Mawpath. They are often used as both beasts of burden and as devastating war mounts. They are fully capable of carrying two full-grown Ogors or the many provisions and armaments of the migratory Mawtribes.[2c]

When used in combat the beasts are mounted by two Ogor Beastriders, known as Thegns, who are tasked with directing the savage beasts toward the enemy battlelines.[2c]