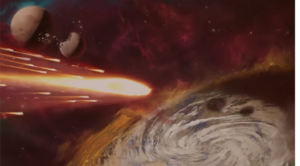 A Seraphon Ship falling into the Realm of Ghur with its two moon, Koptus and Gnorl Half-Eaten in the background.

The Realm of Ghur, also known as the Realm of Beasts, is one of the eight Mortal Realms. A realm of untamed savagery where only the strongest can hope to survive.[1a][8e]

Arrow of the Hunt

The Rune that is used to represent the Realm of Ghur is the Arrow of the hunt, and it is a fitting icon for the wildest of all the realms, straight forward and unswerving. The peoples of Ghur will often carry bows or projectile weapons as their primary armament.[24] [25] 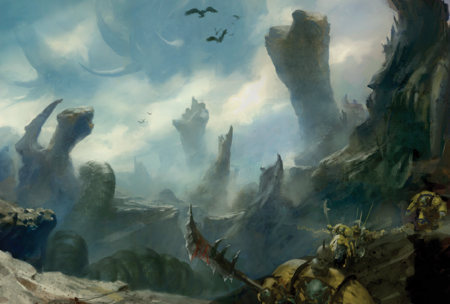 A reality of titanic monsters and primordial savagery, the Realm of Ghur is a place of conflict and wildness. The embodiment of hunger, brutality and the survival of the fittest, Ghur is a realm of life, but not in the same way as Ghyran. No, it represents life in competition with itself, the strong seeking to dominate the weak, predators hunting their prey and in turn being hunted themselves. For everything is both predator and prey. Gargantuan beasts clash with one another for the right to mate, carnivorous flora seek to ensnare animals the size of castles and grow tall on the blood of the slain, their roots drinking deep of the life fluids.[24] [25]

Even the lands themselves seek to conquer one another, mountains slowly grind across the land, seeking to dominate the earth below, all the while the forest upon it's slopes dig their roots ever deeper, in an attempt to consume the mountain.[24] [25] Some even believe that Ghur had already been overtaken by a bestial animus when the realms were created. [29a]

Ghur is composed of a near-endless string of jagged continents, each awe-inspiring in its primeval splendour. [24] [25]

The peoples of Ghur are straightforward, pragmatic and adaptable. Called Ghurites, they prefer to deal with any situation head-on, casting aside subtlety and guile. Ghur has more tribal peoples then any other realm, breeding mighty warrior cultures and fearsome warriors who revel in the thrill of battle rather than fear the possibility of death. Many Ghurites are also skilled hunters and trackers able to tame or kill a beast, for the hunt is beloved much as a matter of sport as it is of survival.[24] [25]

In the more civilized places, the people of Ghur tend to use whatever materials that are at hand for there settlements. Which usually are the ancient bones of long-dead titanic creatures. Their great cities are composed of stone and ivory with wall studded with giant iron spikes, to deter some monsters from attacking the settlement. Those creatures that persist in their attack are usually skewered on the spikes and are harvested for meat and materials. [24] [25]

Fashion in the realm is represented with the colors often associated with Ghur, Browns and amber. But there are other colors, White and ivory of bone and the reds of blood. Fur is also common among Ghurish fashion. [24] [25]

As the Age of Sigmar began, many of Ghur's bone-strewn continents were covered in ash by glowing rain.[8d] Many Dawnbringer Crusades are launched in Ghur, especially in the continent of Thondia.[29a]