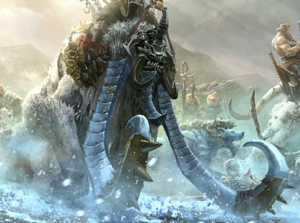 Thundertusks are creatures born in the numerous arctic regions of the Mortal Realms, and are said to look like Stonehorns, both are used as mounts by the Beastclaw Raiders. When they charge into battle their skin generates waves of cold that cover the ground in frost. Their breath is more dangerous, quickly turning their targets into frost-covered statues.[1]

Their Ogor riders gather the flesh left on the battlefield, catching prey with crossbows and throwing nets. The ogors not only use these cold-emitting beasts to make it easier to catch prey, but also as walking food stores, keeping meat fresh hanging in hooks on the beasts sides.[1]

These mighty beasts are known to roam many regions of the Mortal Realms. One such region they can be found in is the Coast of Tusks in the Realm of Ghur.[2a]