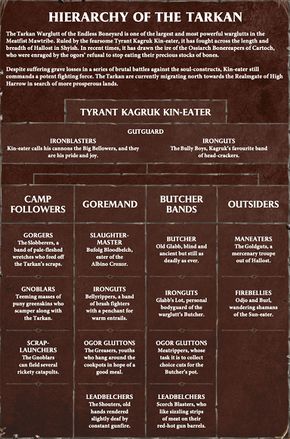 Hierarchy of the Tarkan warglutt

The Tarkan Warglutt of the Endless Boneyard is an infamous warglutt, considered to be one of the most powerful and largest of the Meatfist Mawtribe. They have waged war across the length and breadth of the afterlife known as Hallost.[1a]

The Tarkan Warglutt grows infamous through a series of campaigns across the Underworld of Hallost, their endeavours]] eventually drawing the ire of the Ossiarchs of Cartoch, as the Ogors refused to stop eating the bones left in the wake of their campaigns.[1a]

This eventually escalates into open conflict, with the Ogors suffering a number of devastating losses against the soul-constructs. Still, they remain a potent force as they migrate further north, towards the Realmgate of High Harrow, seeking more prosperous hunting grounds.[1a]

Structure of the Tarkan Warglutt