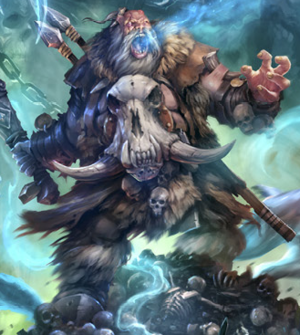 The Icebrow Hunters are the trackers and prey-stalkers of the Beastclaw Raiders and the Ogor Mawtribes. Each of them is at home in the warped and frostbitten wilds of the Mortal Realms. To them falls one of the most vital tasks amongst ogorkind, for it is they who range ahead of the devouring horde and locate new sources of food for the ogors to descend upon.[1a]

Icebrow Hunters are loners by nature, more content in the company of beasts and the elements than their fellow ogors. Whether through godgiven gift or simple natural intuition, each possesses a keen sense of direction and innate survival skills. Such things are necessary, for those who cannot master the wilderness are sure to be broken by it. Though brutish, gruff and possessed of little regard for personal hygiene, the skill of the Icebrow Hunters is so renowned that they have even occasionally found employment with the other races of the realms. Few are more capable than an Icebrow Hunter when it comes to locating legendary monsters or hidden ruins, and it is said that the most experienced Hunters are even able to track down lost and twisted paths between realms.[1a]

Icebrow Hunters report directly to their Frostlord, but they are one of the few ogors that a wise tribal leader will not try to bully into submission; after all, it is through the skill of the Icebrow Hunters that the ogors find their next meal. Typically left to their own devices, Hunters may occasionally be enticed into fighting alongside an Alfrostun.[1a]

Though they carry trusty clubs to batter prey into submission, Icebrow Hunters are unusual amongst ogors in favouring ranged weapons. This has a basis in practicality, as even the mightiest Hunter will struggle to bring down a raging Stonehorn or Maw-krusha up close.[1a]

The most common weapon used by the Icebrow Hunters is their great throwing spear – when given enough of a run-up and hurled with enough force, these sharpened staves can fell flagging monsters with a single blow. Some also carry heavy-duty crossbows in order to bury their prey under a storm of monstrous projectiles. The strangest quality of the Icebrow Hunters, however, is their ability to produce icy breath. They have learnt how to brew potent concoctions from the freezing blood of their Frost Sabres, which, when downed swiftly, allow them to exhale a magical blizzard that freezes those it touches where they stand.[1a]