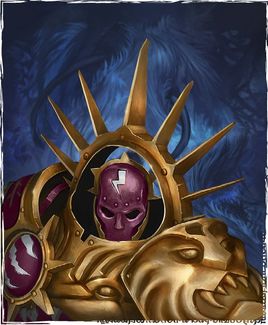 Zephacleas is the Lord-Celestant of the Beast-Bane Warrior-Chamber of the Astral Templars. He was once a chieftain of the Ghurlands tribe, fighting for survival and food or to clear the woods of monster. Now as a Stormcast Eternal he seeks nothing but to sweep clear the taint of Chaos out of the Mortal Realms.[1][2]

Before he was a Stormcast, Zephacleas was a brawling chieftain of the Ghurlands tribe. His tribe led a primitive, nomadic existence fighting off Orruks and Chaos traitors as they travelled through the dense forests of those savage kingdoms. He was chosen from amongst the greatest of barbaric tribal champions he was reforged and renamed Zephacleas.[2]

He and his Warrior Chamber earned their war-name in Azyrheim hunting the remaining beasts that lurked in the high crags and deep canyons of the mountains of that Realm. Zephacleas slew the Black Bull of Nordrath and his chamber had harried the beast-packs of the Antarktos Ridge to extinction. [3a]

He trains his warrior into battle as he once did, but now in Sigmaron, the place he had once worshipped as the home of the gods.[2] After landing on Tephra Crater he was given the task of leading his men to climb through its western slopes and clear the howling hordes that guarded and ancient duardin road that went through the Raxulian Lava-Tubes.[1]

Four Warrior Chambers of the Astral Templars entered the Gnarlwood and finally cleansed it of its Brayherd inhabitants, despite heavy losses. Zephacleas took the three monstrous heads of Grand-King Gidhora, the beastlord who had ruled there. Following this victory, Zephacleas and his chamber were dispatched into the wildest regions of the Ghurlands to seek out any sign of the deity known as Gorkamorka. They left the Amber Steppes and marched to Nettlefang Mere in the southern Ghurlands where they joined the battered remnants of another Warrior Chamber. [3a]

He engaged the army of Gordrakk and captured one of his orruks, Stabbajack before sending him back as an emissary to the megaboss, challenging him to a duel. [3c] Gordrakk met him and even listened briefly to his words- that Sigmar was seeking a renewed alliance with Gorkamorka and then they fought. However their duel was interrupted by the Gaunt Summoner Zazul who had been disguised as a shaman and now attacked them both, aided by the Ninety-Nine Feathers and horde of summoned daemons. [3d] Together Orruk and Stormcast defeated Zazul and then joined forces to attack the Howling Labyrinth where Sharizad the Shimmering Countess of Charn was seeking Marrowcutter one of the Eight Lamentations.[3d]

During the subsequent battle Lord-Celestant Gaius Greel stabbed her with her own crystal blade after she had discarded it in favour of Marrowcutter which unleashed her captured souls against her, badly wounding her. Seizing their opportunity and before she could regenerate, Zephacleas and Gordrakk struck her at the same time, shattering her in a storm of iridescent splinters.[3e]