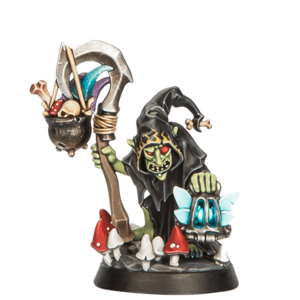 Zarbag is a Grot Madcap Shaman that leads the Zarbag's Gitz underworld warband.

Him and his band were looting the ruins of Shadespire and followed the aroma of fungal spores into the underground. They tunnelled through an enormous sinkhole and feel in the Thanatological Gardens of the Mirrored City. Around them were fields of choking mould and towering clusters of Deffcap Mushroom, everything he had ever desired.[1]

He has decided that he and his band will spread this fungus far and wide so as to draw more of their kin into the Mirrored City. Since then he has wandered the twisted halls of the Nightvault for as long as he can remember.[1][3]

He is a potent wizard able to cast the Face of Da Bad Moon spell, which give a different and terrifying meaning to "mooning the enemy".[3]

He is armed with a cursed sickle he uses to attack his foes in melee range. He carries with him a cage holding a sniffer spite that he has "persuaded" into tracking down potent magical fungi that he can use to enhance his casting.[3]