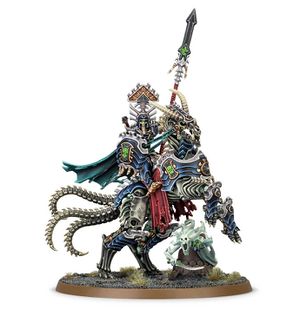 A miniature of Patrus Zandtos.

Patru Zandtos, also known as the the Dark Lance, is the Arch-Kavalos of the Ossiarch Empire. Wholly content with his current position, he is driven purely by his desire to cleanse Shyish of the living.[1a]

In his mortal life, Zandtos was considered a purist with a single-minded pursuit of the morbid arts. Serving for over sixty-years as an assassin-mortician, he would revere death even as he inflicted it upon those he was hired to kill. Rather than flee the scene of a murder, he would instead remain to inter his victim with great honour - despite the effort involved in preparing a grave and a body for burial in a presentable fashion. This ritual he would perform always with professionalism and without complaint.[1a]

As with all stoics of his of his homeland, Zandtos' soul departed to the underworld of Ossia. There, the credo of hard work being its own reward ensured the underworld thrived. The neatness and sterility of Ossia was much to the liking of a mortician like Patru Zandtos. However, with the coming of Sigmar to Shyish, the lands of Ossia were newly settled with indolent barbarians that would kill their enemies and leave their corpses to be pecked apart by carrion birds. Each day Zandtos looked upon a new atrocity until he was driven to the point of violent. Initially launching a lone-wolf genocidal campaign against the living, Zandtos was eventually joined by like-minded spectres.[1a]

Eventually, the great general Katakros rose to prominence in the lands of Ossia and Necros. Over the course of a long symposium, Zandtos made common cause with Katakros. Utilizing the might of the Ossian Echelon, Zandtos could accomplish his goal of eradicating the living from Shyish ten times faster, and eventually end their threat to the order of the underworld. However, this desire turned into something far bleaker when Katakros rewarded Zandtos with the Dark Lance, a lethal blade that focuses its wielder's intent. In the case of Zandtos, it intensified his desire for death above all at the cost of his desire to bring order and tidiness to the underworld. Since the coming of the necroquake, Zandtos has forsaken the mortician's code of dignity and repose of death. Instead he now leaves behind the disorder and carnage he once despised. It is possible that he may indeed slaughter his way across all of Shyish, and bring the realm a great leap closer to Nagash's necrotopia.[1a]