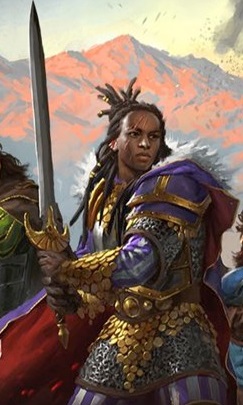 Zana Mathos is a Sell-sword and Agent of Grungni, a daughter of the Realm of Chamon. [1]

She is tall, dark skinned and haired, her body clad in battered war-plate the colour of tarnished gold over well-worn, if good quality, clothing, her head guarded by a golden helmet, wrought in the shape of a gryph-hound's head, with a coif of bronze feathers. Leather gloves cover her hands whilst vambraces made from hundreds of coins protect her forearms. [1]

She normally has a wool blanket bundled up and tied across her chest with leather straps, in the manner of the freeguild. Inside the folds of the blanket would be food and kit, as well as any valuables she carried. [1]

She served in the Gold Gryphons regiment of the freeguild in the city of Vindicarum and rose to become captain but along the way she made enemies amongst the other officers, usually Highborn Azyrite's. This led to numerous duels and eventually one too many duels, even for Vindicarum. This last duel was the result of one of her peers killing a soothsayer whose predictions of the future upset him, she avenged the girl's death and so fulfilled the prophecy.[1]

Becoming a sell-sword, Zana has been to a great many places across the Mortal Realms and made friends, allies and enemies on her travels. She has served the duardin god Grungni for years which has given her purpose.[1]