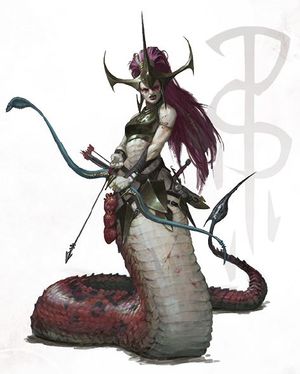 The Zainthar Kai - also known as the Blood Saints, first and most revered of the Scáthborn, are a sect of the Daughters of Khaine. Each Scáthborn of the Zainthar Kai carries at least three drops of Khaine's blood in their veins. Many of those born from his cursed blood perished, unable to bear its potency, but those that survived soon learned to wield Khaine's power as a weapon. Wrecking their foes with mighty blows, or waves of unbearable agony.[1b] The greatest of the Zainthar Kai broodcrones pulse with blessed blood, so full of rage and power that those unlucky to come close to them can feel their blood boil inside their veins before it comes pouring out of every orifice.[1a] For centuries, Morathi kept them hidden from the world. Deploying them only in the most pivotal battles of the Cathtrar Dhule before they returned into their vast, underground brood-nests.[1a]

Now, with Morathi's ascension to godhood, the Scáthborn have been revealed to the Mortal Realms, heralding a new age for the Daughters of Khaine, with the Zainthar Kai at the forefront. The Blood Saints are treated as holy beings among their kin. Crimson tears spilling from their eyes, and their wings and scales flushed with sacred blood. The warriors of this sect seldom flee from the battlefield, fearing that their cowardice may dishonor their divine legacy.[1a] Aside of the Scáthborn, making up most of the sect, the nest-matrons of the Zainthar Kai coven also maintain a force of expendable Leathanam and Witch Aelfs to perform menial tasks, and lesser roles on the battlefield.[1b]