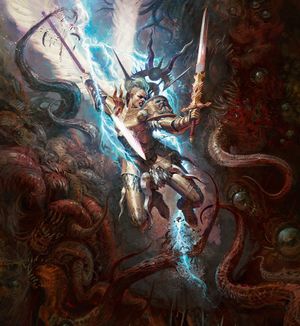 Yndrasta, also known as the Celestial Spear, is a near-mythic lord from Azyr tasked by Sigmar to hunt down terrible beasts on the rise in Ghur.[1]

Yndrasta was born to a mountain clan in Ghur known for their Pegasus-riding cavaliers. Despite her formidable skill she had no interest in leadership but only found satisfaction when knee-deep in viscera. But during the Age of Chaos her queen was struck down by an assassin and she was entrusted by her queen to rally the local tribes to keep the daemonic hordes at bay long enough for Ghurish tribes to find refuge in Azyr. She forged alliances from the worm riders of Shu'gohl to the vampiring knights of Askurga Renkai. The alliance managed to hold off the forces of Chaos until Khorne unleashed the Daemon King Doombreed who destroyed all resistance in its path. Yndrasta sent away her allies to find refuge and rode off against the daemon but was torn apart, but not before driving her lance into the daemon's flank while praying for SIgmar to annihilate the daemon with her. It is said that Sigmar sent one of the Great Bolts to blast the Doombreed while taking Yndrasta's soul to the heavens.[2b]

For twelve weeks Sigmar toiled over her broken soul channeling the power of Ghur's moons. She was reforged as one of Sigmar's supreme champions and was granted white pinions so no beast would escape her. She became Sigmar's huntress that hunts down the most horrific creatures.[2b]

Over the centuries Yndrasta has killed the Dragon Emperor of Ymirloc, the Jabberslythe Court of Neos and the Ghorgon warlord Hargoth the Shatterer. Yet three continue to elude her, first is Doombreed, second Krakanrok the Black the father of the Dragon Ogors and finally Kragnos. Some in the courts of Azyr who has observed her cold satisfaction in slaughter claim she is no figurehead for any crusade while those who fought alongside her praise her for valour and skill.[2b]

After hearing dark rumours and disturbances in Thondia she sends the Auric Lions of the Hammers of Sigmar all clad in Thunderstrike Armour to investigate the threat. There they find that the Orruks known as the Kruleboyz were brewing a swamp elixir to poison the leylines of Ghur. The Stormcast Eternals battle the Kruleboyz in what would be known as the War at Amberstone Watch but were pushed to the brink of defeat until Yndrasta herself intervened to shift the tide and chase away the Orruks. However the Kruleboyz managed to poison enough leylines to transfigure a swathe of Thondia into marshland but Yndrasta was resolute and taking charge of a Dawnbringer Crusade she destroyed three Kruleboy lairs in quick succession lining her trophy halls with the heads of Orruk despots.[2a]

Yndrasta is clad in Thunderstrike Armour, crafted for Sigmar by the duardin deity Grungni. She carries the Blade of the High Heavens and Thengevar the sister of Sigmar's own polearm and is capable of seeking out prey when hurled and returning to Yndrasta's hand after it has fatally pierced the monstrous target.[1][2b][2c]