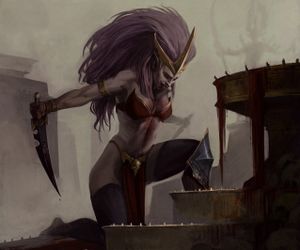 Witch Aelfs are the public face of and often considered the heart and soul of the covens and sects of the Daughters of Khaine faction.[1b]

All are fanatical devotees of the god Khaine and his worship occupies much of their lives. They practice with weapons where other cults might have prayer, duels instead of the reading or transcription of holy books and, of course, battle. Warfare is often considered the purest form of worship for their god allowing them to enter a state of holy rapture as they commune with the deity.[1b]

When not fighting they are often described as cold or at least reserved, a contrast to the battle lust that overtakes them in battle as they leap and pirouette through the carnage. Should they be led by a priestess of their order, a unit can quickly lose all self-control as they tear the hearts from living foes revelling in the blood that is spilled - this can be quite disconcerting for any allies that have accompanied them to war.[1b]

In the Age of Sigmar, gladiatorial spectacles are held in many cities as Witch Aelves demonstrating their faith and devotion to the free peoples of the Mortal Realms. [1b]

Truly exceptional witch aelves may undergo the honour of becoming a Sister of Slaughter, if they can survive the painful transformation.[1d]

A rare few become Soulbound, released from their Temple by the High Oracle herself who declares that they should use their newfound freedom to advance the faith, but then often finding themselves dispatched somewhere that is very likely to get them killed. [2a]

Witch Aelves favour the sciansẚ - a long razor sharp dagger which they use either in pairs or with a blade edged buckler.[1c]