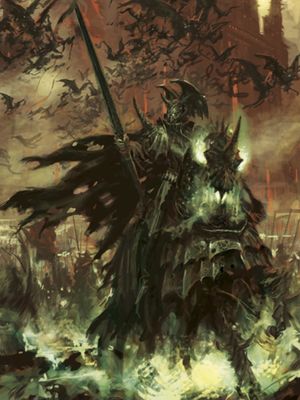 A Wight King mounted on a Skeletal Steed.

Wight Kings are the skeletal lords of the Deathrattle nations and vast armies of undead. They are being creatures of ancient pride and a blazing hatred for the living. They are champions, tyrants and rulers whose lust for slaughter and conquest did not stop after death and are often awoken from their restless slumber with the promise of both. [1c][1d]

They are able to call upon reinforcements using Deathly Invocations.[1a][1b][1c][1d]

A Wight King was once a mighty and brutal warlords that were buried after their deaths in tombs, protected by shamanistic spells from thieves and looters. Some of these tombs where built where dark magic flows and pools, and many Wight Kings rest uneasily in these accursed places. When this dark magic grows strong these undead king rise from their crypts as Wight Kings, their eyes glowing with unnatural life.[2][3][4]

Wight Kings are the rulers of the Deathrattle Kingdoms. While they have lost their sense of morality, their hunger for conquest and war has not and their tactical acumen remains as sharp as ever. Thus unburdened by doubt and weariness, the Deathrattle phalanxes react instantly to their lord’s commands.[5b]

Some Wight Kings - especially those from nations in Aqshy and Ghur - relish the chance plunge into a bloodbath, but many prefer to hold back until the final push to rout the enemy forces. When they join the battle they stride forth at the head of their household guard or lead the charge of mounted barrow-knights. While their armour appears to be rusted, the Shyishan sorceries that cling to them allow the Wight Kings to withstand even the most punishing blows. [5b]

Many Wight Kings act as frontline champions for the Gravelord armies. Whilst the weakest of them can be dominated by Vampires, most retain a sense of pride and individuality giving them an imperious will that it is difficult for most to bind them into service. Thus, most Soulblight prefer to make alliances of mutual benefit with Wight Kings.[5a][5b]

Some Wight Kings can go to battle mounted on Skeletal Steeds. The incorporeal bodies of these steeds can carry them through walls and across fens with ease.[1a][1c][2]

Their armouries are stocked with ancient blades and lances bearing dire, vorpal curses capable of snatching away a living soul or freezing a warrior’s heart with the merest of scratches.[5b]

They wield cursed Baleful Tomb Blades into battle, which they often use to behead their foes. Some pair these with Ancient Shield to batter enemy's blows aside, while other pair them with Infernal Standards saturated in Death magic that sustains and prevents the destruction of the undead.[1a][1c]

Others wield massive Black Axes, many-notched blades deconsecrated with the blood of innocents that sends the souls of their foes howling into the abyss, and a suit of heavy Barrow Armour.[1b][1d]