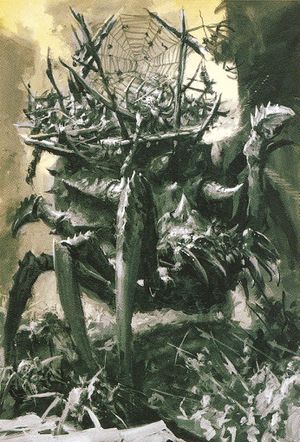 They are driven by a desire to please the Spider God for which they seek to bring about the Everdank, so that all of its arachnid children can hunt forever amidst the twilight shadows. This alongside the constant need to appease the hungry Arachnaroks makes Webspinner Shamans warlike leaders and they personally lead many battles.[2]

These ranting spellcasters encourage small venomous spiders such as purple skullbacks to nest in crannies behind their ears, between the toes or even in the shaman's mouth. These spider-bites infuse their blood with hallucinogenic toxins that allow them to experience vivid wakings visions from the Spider God that allows them to interpret its will to enter the Arachnarok nests without danger. These bites grant them the mystical protective energies of their gods, protecting them from the most grievous wounds. It also enhances their magic with arachnid energies, allowing them to inject many-legged haste into their skittermobs, conjure wind-blown shields of magical webbing to protect their warriors or summon deadly flesh-crawling spider swarms. [2][1b]

Webspinner Shamans cast spells by requesting the wicked aid of the Spider God, which often works by empowering a nearby unit or, more rarely, many units. The Gift or Venom of the Spider-God spell empowers the strength of their spider venom with a hiss. The Speed of the Spider God requires a shriek and grants nearby Spiderfang with preternatural speed.[1a][1b][1c]

Especially malevolent and old Arachnarok Spiders are selected to carry the Prophets of the Spider God, the Webspinner Shamans that often ruled over the Spiderfang tribes, and the Catchweb Spidershrine they attend atop their howdahs. Alongside them are the prophet's mob of hangers-on, the Spiderfang Grot crew, that protect them using their Spider-bows and Crooked Spears. The sight of casters often improves moral amongst the Spiderfang.[1a][1c][3]

Wenspinner Shaman defend themselves in melee with their Spider God Staves.[1b][1c]

Those that ride on the back of Arachnarok Spiders attend to a Catchweb Spidershrine, a ramshackle altar to the Spider God shimmering with malevolent arcane energy. The shamans can draw power from these shrines to empower their casting and unbinding, as well as allowing them to cast two different spells at once and unbind spells faster than their foes can expect it.[1a][1b][3]

Before the Gloomspite Gitz Battletome of 2019, Webspinner Shamans were called Spiderfang Grot Shaman and didn't have a on foot warscroll.