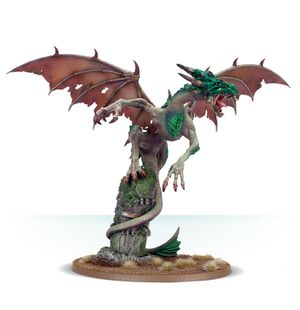 Warpfire Dragons are ruinous dragons, members of a rare, twisted and malformed branch of dragonkind and malignant Monsters of Chaos.[1a][2]

They can fly and attack with their twisted, barbed claws and snapping jaws, filled with rows of jagged teeth and caustic saliva. They are spite-filled and ruinous creatures that delight in the destruction and mutilation of their foes, specially when they spit gouts of mutilating warpfire, scintillating flames that cause rapid and grotesque mutations in those it touch, reshaping their victims in grotesque configurations of their former selves until they die. When they die the burning morass of ruinous energies that seethes within them explodes in a raging blast of anarchic energy and unleashed fire that reduces their foes to mounds of malformed flesh and scorches the land.[1a][2]