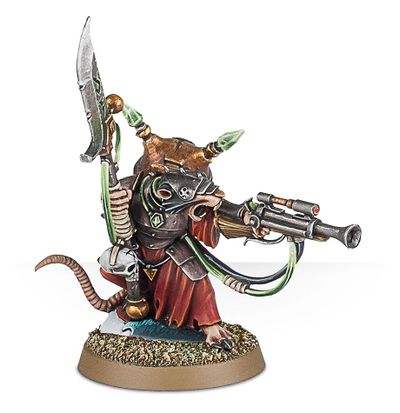 An Warlock Engineer is a powerful and dangerous techno-sorcerer of one of the Clans Skryre.[1]

They blend magic with technology in a myriad of inspired, dangerous and often unreliable ways and utilising such machinery as thaumognaw-accelerators and warp-power accumulators. They squabble, fight and scheme to gain power with their own clan and the Clans Skryre, with the greatest of their number becoming Arch-Warlocks. Although some warlocks in the Clans Skyrye specialise in specific areas, most Warlock Engineers are generalists and prefer to fight enemies at a distance, casting warp-lightning through various devices. However some can be found piloting their own creations, with the most common being Doomwheels. [1c]

In battle they can be found with strange machines strapped to their backs, energy sparking and crackling across their melee weapons, whilst many also wield customised warplock pistols.[1d]

Warlock Engineers are Wizards and know the Arcane Bolt, Mystic Shield and Warp Lightning spells which they can boost (although it is risky) with their warp-power accumulator. [1d]