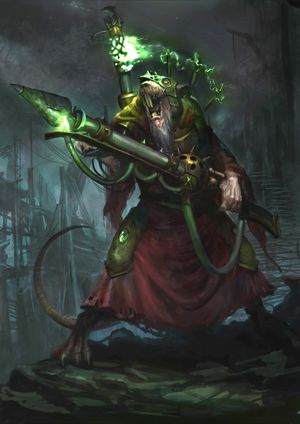 The signature weapon of Warlock Bombardiers is the doomrocket which consists of a long brass pole fitted with a trigger and warp-volt sparking mechanisms to which a large warhead can be fixed. When the trigger is squeezed a shock of warp lightning runs up the insulated pole and sparks off the propellant in the doomrocket's base. When the doomrocket slams into the ground it detonates with a boom and a blinding green flash causing hideous devastation. Different Warlock Bombardiers prefer alternative types of warheads often based on their enginecoven. For example Bombardiers of Whyrlblade Threshik use flechette bombs, Gascloud Chokelung Bombardiers create long-range poisoned wind bombs, and those of the Gautfyre Skorch explode in sprays of corrosive warpfire.[1][2]

The Doomrocket can also be overloaded for increased damage but this can result in failure and result in the wielder becoming the victim instead. [2]