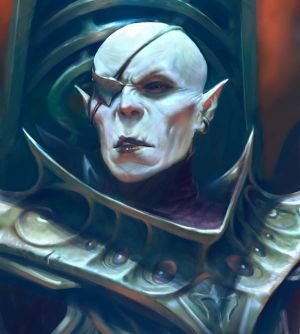 Volturnos, King of the Deep

Volturnos, the High King of the Deep, is the ruler of the Ionrach Idoneth Deepkin Enclave and the last of the Cythai.[1a]

One of the first generation of aelves (or Cythai) that were rescued from the belly of Slaanesh, Volturnos is a warrior king who has fought for his people since the Age of Myth.[1a]

The Briomdar enclave call him the Avenger, as he has been been forthright in punishing their enemies.[1a]

The Ionrach and some other Enclaves claim that he was the very first aelf to be drawn from within Slaanesh, but other such as the Dhom-hain are openly sceptical about this.[1a]

He stood before the god Teclis learning the magical and martial arts and later surviving his light of truth, by the time the capital of the Ionrach, Prion was created he had already built a reputation both as a leader and as warrior but would only become king agfter the battle of the Flotsam Isles. He saw all of his peers perish over the decades and centuries until only he remained of the first generation.[1a]

His eye was lost during the Ambush at the Umbral Sea but later he would go on to lead an coalition of Enclaves to break the siege of Grystleback.[1a]

He bears the blade Astra Solus - blade of light into battle, which was given to him by Teclis and is protected by the Cealith - a shield which can consume the spells and other magic of his enemies.[1a]