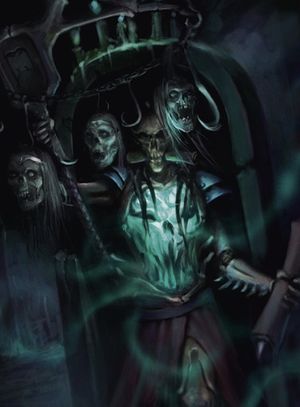 Vokmortian, Master of the Bone Tithe is many things to the Ossiarch Bonereapers; an envoy, an overseer, a statesman, and a conqueror. He is blessed with license from Nagash himself to utterly destroy those who defy him, for his duty is to orchestrate the Bone-tithe itself. With this great authority, he has reduced even the most sprawling of empires to nought but dust, for such is the will of the Great Necromancer. [1]

Being the first of the many envoys sent to parley with mortals, he is often the first contact many nations have had with the Bonereapers - a day surely cursed for generations to come. Here, accompanied by an elite Cohort of Bonereapers, he will read the Decree of Nagash in his terrible, rattling voice. At this point it matters not whether the unlucky settlement opens hostilities or gives into these demands; Vokmortian will claim these bones either way. [1]

As the foremost emissary of Nagash, he channels a portion of his lord’s might- what Vokmortian sees, he sees. This connection is so potent that when the Bone-Tithemaster’s demands are denied, Nagash’s lifeless, icy gaze blazes through the spectral visage contained within Vokmortian’s chest, striking those who have displeased him with heart-stopping terror. [1]

This connection extends to him in other ways, too. Whilst Nagash is a god, with all the power associated with that name, he is not omnipotent, and whilst he is the undisputed master of Death (and Undeath), his forces are disparate and varied. This means that often they are unruly or occasionally disloyal. As bearer of the Decree of Nagash, Vokmortian is often sent to bring these unruly Wight Kings or Vampires into line, able to compel them into obeying by merely lifting the scroll. It is this that makes him one of the most dangerous creatures in the Realm of Shyish. [1]