From Age of Sigmar - Lexicanum
(Redirected from Vindictor)
Jump to: navigation, search

With Sigmar's lightning bolt on their left shoulder[1c], the Redeemer conclaves serve as the primary battleline units of the Stormcast Eternals. Relentless and stalwart, these hardy fights are considered the sigmarite soul of their chamber.[1a][1b] 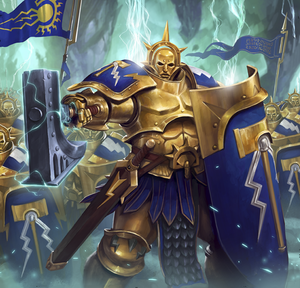 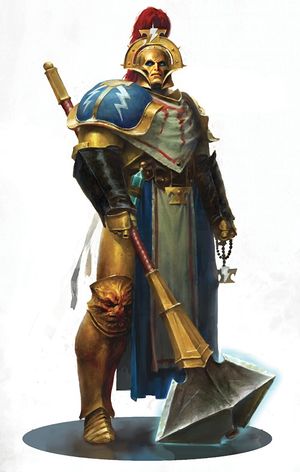 Sequitors are the line infantry of the Sacrosanct Chambers with the ability to channel the tempest through their magical weaponry. However they do not consider themselves to be true mages as they are still in the first stages of arcane mastery but for mortal eyes they are a terrifyingly supernatural. They wear armour of burning sigmarite and their weapons glow blue with the power of High Azyr. In battle a corona of energy crackles around them and form crowns of corposant while thunder rumbles within their war cries. [6]

Most wield a heavy and an angular Stormsmite Maul and a broad Soul Shield. In appearance they are similar to that of Liberators but a Sequitor is able to channel magic into the armaments they carry to imbue either their weapon or shield with aetheric power, then moving this enchantment between them to fluidly shift between defence and attack. When empowered a soulshield so empower can turn aside even a blow from a daemon-possessed blade or a Hexwraith’s soul-cutting scythe while a strike from a stormsmite maul with the energy flowing from the Sequitor’s soul stuns the adversary’s mind into thunderstruck inactivity as it mangles and scorches their flesh. Some Sequitor-Primes that lead them carry a Redemption Cache which can drag the souls of the damned from their bodies into it. But the most powerful are the two-handed maces used by the strongest of the Sequitors. Known a Stormsmite Greatmaces have each been laid against the head of Ghal Maraz for a night and a day, inheriting some of its godly power. Its thunderous impact tear through baroque plate and chitinous mutation as if it were paper-thin while flesh is blasted into nothing more than a scattering of cinders. Despite this destructive power true purpose of these weapons is not to engage mortal foes, but to slay the otherworldly such as gheists and daemon who are blast apart and banished from the Mortal Realms forever.[6] [7]

Vindictors hold the line of the Thunderstrike Hosts. Equipped with Stormspears and heavy shields, each one is the equal of many mortal warriors.[8]