The inside one of the eight circles of the Varanspire

Archaon’s main stronghold in the Mortal Realms, the Varanspire is located in the Eightpoints. 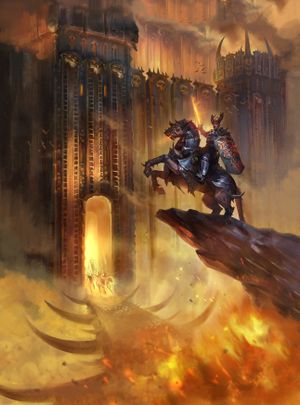 The outer walls of the Varanspire

The Varanspire is under a massive realmgate to the Realm of Chaos in the sky and the center of the Eightpoints. It is protected by spiked walls manned by hordes of warriors, daemons, and monsters sworn to Archaon. The walls are divided into eight concentric circles, each taller than the last, with the first circle in the center, corresponding to each of the eight circles of the Varanguard. Each circle’s fortifications are controlled by the master of its respective Varanguard circle.[2][3a]

In the heart of the Varanspire, the massive citadel that rises above the walls, lies the Chamber of the Vanquished where Archaon’s throne stands. While he has never sat in it, his Realm Lords still gather and bow under its shadow to lay their trophies and triumphs before it.[3a]

Around the walls are armies, traders, worshippers, champions, and slaves of the Chaos Gods all clustered underneath the Varanspire’s shadow to partake in rituals, sell trinkets, gain favor, or muster for a campaign of the Dark Gods.[2]

The strategic location of the Varanspire inside the Eightpoints allows Archaon’s armies to move wherever he needs them.[4b]

Following the War of the Allpoints in which Archaon gained control of the newly renamed Eightpoints, the Varanspire was raised during the Age of Chaos.[3b][3c][4a]

Archaon has not set foot in the Varanspire in centuries though, vowing not to rest upon his throne until his final victory is won.[4c]

During the Soul Wars, Orpheon Katakros attempted to lay siege to the Varanspire, but was driven back by Archaon.[5]