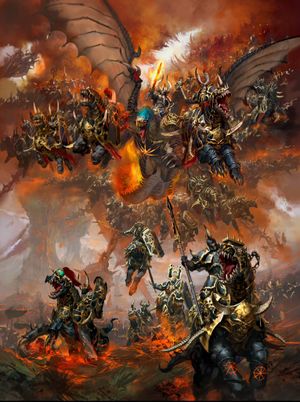 Warlords of incredible power and menace in their own right, the Varanguard have grown into creatures of immense cruelty over many lifetimes of merciless slaughter and conquest. Each individual Varanguard has led countless campaigns across numberless centuries, having risen through the ranks of Chaos upon a fountain of blood - they command the respect of mortal lords and kings, Daemon Princes and Daemon Kings, for when they ride into battle, it is at the bidding of the Everchosen alone. Their allegiance lies solely with Archaon, and the Three-Eyed King understands perfectly how to use their massive killing capacity. Where the Varanguard ride, subjugation follows.[1]

Becoming a member of the Varanguard

Only those deemed worthy by Archaon may serve within the Varanguard, for the Everchosen’s favour is reserved for the mightiest servants of Chaos. Thus are the ranks of the Varanguard drawn from all who serve the Dark Gods – howling berserkers, devious changesons, befouled plague-knights and paladins of pleasure, all striving for the chance to fight beside the greatest general the realms have even known.[2a]

Before a warrior may attempt to prove themselves worthy of the Varanguard, they must be summoned by a sign of Chaos. This omen can take many forms – perhaps the likeness of the Everchosen in the flames of a burning keep as its defenders scream for death, Archaon’s silhouette formed from a spray of arterial blood upon a carrion-littered battlefield, or the Everchosen’s name howled in unison by the plague-choked throats of a hundred corpses. When a warrior sees such a sign, there can be no mistaking that they have been called into Archaon’s service.[2a]

Almost all warriors heed the call to serve in the Varanguard. In that moment, when the will of the Everchosen is made clear to them, they cast off all former allegiances and begin a fell pilgrimage. It goes by many names – the Walk of Blades, the Dark Choosing and the Red Path, to name only a few – but it is without exception a long and brutal road. Before they may stand in the presence of Archaon, they must complete eight trials. These tasks vary with each aspirant, but all are harrowing and many do not survive them. When they finally ride before Archaon, if they are worthy, he will place them in one of the Eight Circles of the Varanguard, depending on the outcome of their trials.[2a]

It is known that by the start of the Age of Sigmar Archaon had tens of thousands of Varanguard warriors and that these warriors out number the Stormcast Eternals.[3][2h]

"Tell your daemon-spawn lord, Krangrath, that I do not care for his outbursts. The Blood God may be appeased by skulls, but the Everchosen demands obedience. Tell him that if he does not immediately deploy his armies to the Cinderbite Expanse, I will personally nail his wings to the Varanspire and take his horns as a trophy, meagre as they are."

Of the thousands of Varanguard who serve Archaon, only a small percentage are chosen to ride within the First Circle of his retinue, the dreaded Swords of Chaos, and thus stand closest to their lord in battle. More likely, a Varanguard will find himself fighting among one of the other seven circles, such as the Scourges of Fate or the Blades of Desolation. These circles are no less terrifying than the First, however, as each has its own crucial role to fulfil in Archaon’s realm-spanning strategies. Whether Third Circle or Eighth, all Varanguard stand equal beneath the pitiless might of the Everchosen himself.[2a]

The Swords of Chaos, First Circle of the Varanguard, ride into battle at the side of the Everchosen himself as his dark champions and brutal executors of his will. They are Archaon’s martial right hand, chosen to ride into battle alongside him whenever he takes to the field. Their black and gold regalia reflect their dark lord’s countenance and speaks to the honour of their position.[2a][2b]

Torture and fear are the meat and drink of the Souls of Torment, Second Circle of the Varanguard. They are the slayers of hope and the bringers of despair. They are used by Archaon to spread terror and disorder before the advancing hosts of Chaos. These grim warriors revel in the art of death, leaving behind grisly trophies of their kills. Such is the horror that their brutal practices evoke that many armies flee rather than face them in battle.[2b]

They aided Clepsyrian's search for Slaanesh, forging a path of ruin across the Mortal Realms.[2g]

Shadows disgorge the Scions of Darkness, the dreaded Third Circle. Their black-souled riders are as the night given form and deadly purpose.[2b]

Burning nations and tortured peoples are reflected in the cruel helms of the Reavers of Chaos, Fourth Circle of the Varanguard and merciless pillagers of the realms.[2b]

The heads of kings and emperors hang from the saddles of the Scourges of Fate, Fifth Circle of the Varanguard, for no quarry has ever escaped their blades. No hidden fastness, towering bastion, nor enchanted gate can offer refuge from these deadly huntsmen. When Archaon singles out a target for annihilation, the Scourges of Fate will not return to their master until the object of his wrath has met its end.[2b]

Fortresses crumble and armies scatter before the charge of the Blades of Desolation, Archaon’s hell-forged hammer which he wields to break the realms asunder.[2b]

The Bane Sons, Seventh Circle of the Varanguard, hold that Chaos grows stronger as it feasts upon itself, and so consume the flesh of enemies and allies alike.[2b]

Archaon alone knows the name of the Eighth Circle of the Varanguard, and no man, monster or civilisation to have felt their wrath has ever lived to tell the tale. Even amongst the Varanguard, the reputation of these ruthless warriors precedes them. When the Eighth ride out, no bodies nor ruins are left in their passing, no signs of life at all. Only dust.[2b]

Those who lead a circle of the Varanguard are granted the title Master. They are also known as Marshal. They are commanders without equal and warriors without peer.[4b]

Leads a Konroi of Varanguard Knights. Mentors Black Pilgrims in order to rise in standing.[4b]

A Knight of Ruin, one who has slain countless civilizations in the name of the Dark Gods and has completed the eight trials.[2a]

One seeking to become a Varanguard and is on his required eight trials. Is still a fierce opponent and has countless dead to his name.[4a]

Notable members of the Varanguard