From Age of Sigmar - Lexicanum
(Redirected from Vandus)
Jump to: navigation, search 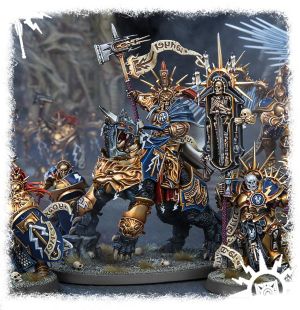 All around the Brimstone Beachhead there are statues built in his image.[4a]

In the Age of Chaos, Vandus Hammerhand was Vendell Blackfist, the smith-lord of the Direbrand Tribe. When Korghos Khul’s Goretide invaded the Brimstone Peninsula in the Realm of Aqshy the tribe bravely resisted and was one of those last to be conquered. Before his soul was snatched away to be reforged by Sigmar, Vendell saw Khul kill everyone he had ever cared for.[1][3][5a]

The Hammers of Sigmar were chosen to spearhead the new war against Chaos in the Mortal Realms and begin the Realmgate Wars. They were tasked claiming a Realmgate on the Igneous Delta from the forces of Chaos, to allow the stormcast hosts to march directly into battle. Most enemies would have recoiled in dismay from the onslaught as the Stormcast arrived in bolts of lightning but instead, the warriors of Korghos Khul’s Goretide welcomed it with bloodthirsty howls and the opening moments of the battle were frantic and confused.[1][4]

The Bloodbound's vast numbers and battle-lust soon threatened to overwhelm the valiant Hammers of Sigmar and Khul himself began to hack his way towards Vandus Hammerhand. Although Khul was defeated in this initial clash, the two would fight again at the climax of the campaign. During that duel Vandus determined that Khul had another realmgate, the Gate of Wrath that lead directly to the Realm of Chaos and potentially limitless daemonic reinforcements.[1]

He set forth to destroy that gate, fighting his way through the hordes of the bloodbound to once again confront Khul. The Chaos champion gains the upperhand and overpowered Vandus but in desperation the Stormcast threw himself at the chaos gate and asked Sigmar to use him as a focus point for his power so that he may destroy the gate. The God answered his warriors prayer and sent a titanic bolt of lightning down which destroyed the gate and allowed the Stormcast to consolidate their victory and claim the entire Brimstone Peninsula.[1][4]

The Hammerhands and the Celestial Vindicators fought through the Realm of Chamon to the dreadhold where Ghal Maraz was being kept by Ephryx, the Ninth Disciple of Tzeentch at the behest of the greater daemon Fateweaver. He along with a coven of Lords of Change were attempting to use the power of the hammer to transport the entire realm of metal to the Realm of Chaos. [1]

The stormcasts managed to breakthrough and confront the daemons but the battle was going poorly until Vandus managed to reach Ghal Maraz. Using Sigmars hammer Vandus was able to banish the Daemon almost effortlessly. The hammer was returned to Sigmar in the Realm of Azyr where he used its power to complete the re-forging of the Celestant-Prime.

The Greater Daemon, Kiathanus who Sigmar had defeated at the Battle of the Burning Skies had been imprisoned and now seemed to be on the brink of release on the Anachron Plateau, to forestall this event, Sigmar sent the Hammers of Sigmar and Vanus Hammerhand. They are confronted not only by daemons in the service of the Gaunt Summoner, the Watcher King, but by the strange properties of the Plateau itself where time moves strangely and unpredictably.[2]

Undeterred, the Stormcast fight their way towards the giant idol of the Truthsayer even as the Watcher King calls in more allies including Slishy's Cavalcade, servants of Slaanesh to delay then whilst he consults the daemon statue. As the Daemon is released, Archaon himself arrives with the full force of his Varanguard to bind the daemon to his service. He and Vandus duel briefly before the Everchosen tears him in half and sends him back to Sigmar’s realm.[2]