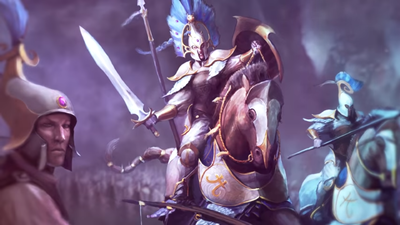 The Vanari Dawnriders is the cavalry of the Lumineth, who ride upon beautiful stallions native to the plains of Xintil.[1a]

The Steedmasters that lead Dawnrider units are wizards capable of accessing the Lore of Hysh.[2]

They have formed a powerful bond with a Xintilian Stallion, allowing each to instinctively know what the other will do a moment before they do it. The stallions are each given a name not chosen consciously but sought through inspiration as the rider presses their forehead against that of their horse.[1a]

When the Vanari ride together, they do so as a blur of glorious light even through the densest and most tangled environments. In battle they charge through enemy ranks in a blazing a white trail before curving around in a tight parabola and plunging in again. It is said that a full formation of Dawnriders can ride down an enemy force that outnumbers them ten times over.[1a]

They are armed with magical Sunmetal Lances with tips that can be superheated with magic and burn right through the bodies of enemies. The Steedmaster often also carries a Guardian's Sword.[1a][2]