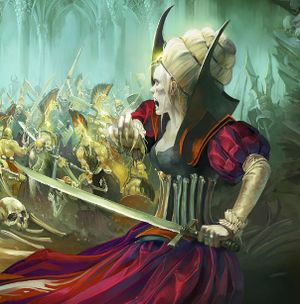 Vampire Queens are ancient and powerful Soulblight Vampires who often ride to war upon Coven Thrones.[1a]

Elder vampires that rule over kingdoms of undead and mortals, a vampire queen is often a beguiling and regal figure, surrounded by her devoted handmaidens - themselves as beautiful and disarming as they are deadly. Some of these chosen maidens have potent abilities in divination and assist their queen in anticipating her enemies. Accustomed to luxury, a Queen of her kind is seldom keen to trudge through the mud of a battlefield but instead may recline upon her gilded throne as her army tears apart her enemies. [1a]

The greatest of them is of course the first Vampire, Neferata. [1a]

Vampire Queens can use her Blood Kiss to create Vampire Lord whenever she slays one of her foes.

Vampire Queens are powerful wizards, able to protect themselves with Mystic Shields, strike down enemies with Arcane Bolts and use the Beguile spell to cloud the minds and hearts of their prey.[1b]

A Vampire Queen is never unarmed, able to use her Predatory Bite as well as her Stiletto whilst her Handmaidens have Needle-sharp Poniards. [1b]