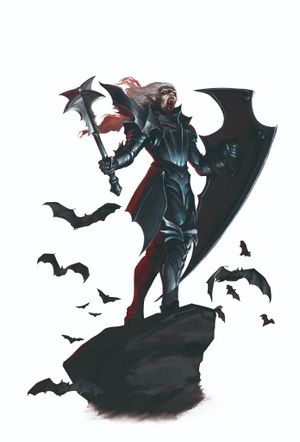 Vampire Lords are powerful Soulblight rulers of kingdoms and settlements in the Mortal Realms. The Soulblight curse manifests in many different ways and hence vampires are a very varied breed. Some resemble little more than frenzied beasts whilst others live in luxury, as aristocrats. Fast, deadly and incredibly resilient, Vampire Lords are a powerful force on the battlefield. They are immortals with a ceaseless craving for fresh blood and can drain a mortal of blood to quickly restore themselves, even doing so on the battlefield with freshly-slain enemies. [1a][3a]

Vampires are Wizards capable of summoning dark magic to shield themselves, destroy them with Arcane Bolts, make their enemies Blood Boil with a curse or inflict them with a Spirit Blight that makes them weaker in melee combat.[1b][3a][3b][3c][3d]

In battle some stalk their prey on foot or are flying horrors with membranous wings capable of flight. But many other others ride with their retainers on Nightmares and others command the field on huge rotting Zombie Dragons, which many see them as the only mounts worthy of carrying them into battle.[3a][3b][3c][3d]

Some can ride on the back of Abyssal Terrors.[3e]

Vampire Lords have a variety of weapons that they can choose to wield, often having had centuries to master many different styles. Those on foot or on Nightmares often wield Spirit-Possessed, some single-handed, others two-handed and some even dual wield them. Those on Zombie Dragons carry Deathlances, that maximizes the damage of their charge, or Vampiric Swords often paired with an Ancient Shield emblazoned with dark heraldry. Some wield an enchanted Chalice of Blood on their secondary hand into battle, and when they drink from it they can reinvigorate their undead flesh.[1b][3a][3b][3c][3d]

In the Age of Myth when Sigmar and Nagash were allies, they would even travel in state to the Realm of Azyr[2a]