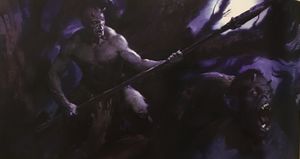 A group of Ungor Warriors.

Ungor Warriors are Ungor infantry of the Brayherds. They go to war in large herds, that magnifies their bitter resentment and hatred, making them more likely to hit their foes.[1a][1b][2]

Units of Gor Warriors are led by Halfhorns, supported by a musician with a Brayhorn and a Banner Bearer.[1a][1b][1a][1b]

They go to war armed with a wide range of weapon like Gnarled Shortspears, also known as Ungor Shortspears, Ungor Mauls and Ungor Blades. These are paired with crudely fashioned Half-shields, used to deflect their foes' attacks.[1a][1b][2]